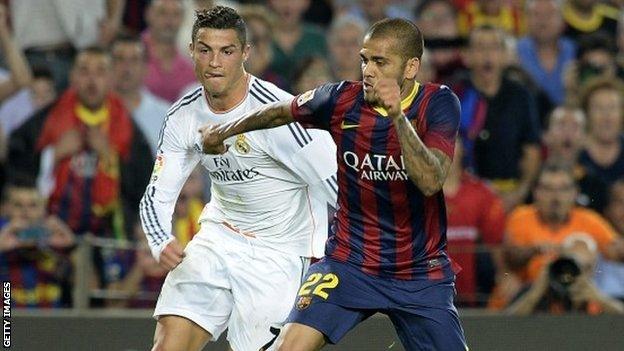 Victory for Real would move them to 73 points, seven points clear of third-place Barca, with nine games remaining.

"I know which line-up I will use against Barcelona," said the Italian, whose side reached the last eight of the Champions League on Tuesday.

"It's not difficult and I won't complicate things."

Coach Gerardo Martino's Barcelona defeated Real Madrid 2-1 at the Nou Camp in October's league match and led the league, but the Catalan giants have slipped up recently, losing three games in the last seven.

Real remain in contention to win the treble. They play Barcelona again in April's Copa del Rey final and look like one of the strong favourites to win the Champions League after easing to a 9-2 aggregate win over Schalke in the last 16.

"We have to take things step by step," said forward Cristiano Ronaldo, who scored twice against the German club to take his tally to 41 goals in 37 Real games this season.

"We had a very good group stage, scoring a lot of goals while accumulating points.

It's one of the few times recently that Real Madrid have gone into the game above Barcelona in the league. Madrid can lose and still be a point in front.

Barcelona are still a very good team but they're not brilliant anymore. I think the way Madrid are scoring, I don't see them losing. A year or 18 months ago I'd have tipped Barcelona but not now. Madrid have got better and Barcelona have got slightly weaker. 1-1

"Let's see who we get next but I see the team doing well at the moment and, one step at a time, we will try to achieve our objective of winning three competitions."

Record-signing Gareth Bale was also impressive after coming on early in Tuesday's match to replace the injured Jese.

The £85m Welsh forward provided an assist each for Alvaro Morata and Ronaldo, as Real won 3-1.

"I am enjoying my game," he said. "We are playing well, with a lot of confidence, and are on a good run. We're coming to a decisive part of the season and we have to keep it going.

"Barcelona is a direct rival and we will try to play a good match and get the three points.