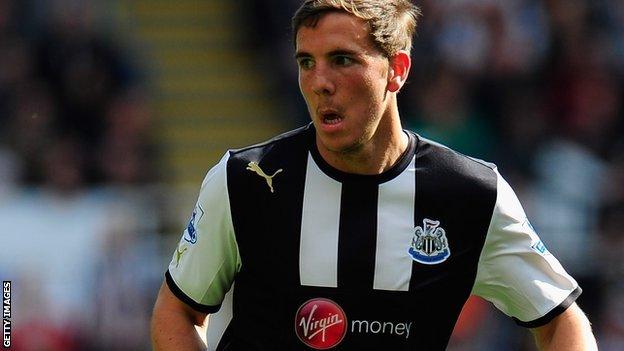 Newcastle midfielder Dan Gosling has been fined £30,000 by the Football Association for breaching betting rules.

Gosling, 24, had admitted a misconduct charge on 10 March following "multiple breaches" of the rules.

They do not relate to matches involving Newcastle or Blackpool, where he has been on loan this season.

Gosling's breach of betting rules relates to Rule E8(b) of the FA's regulations.

The rule states a player "shall not bet, either directly or indirectly" on matches involving themselves or their team - or a competition they play in or have played in.

Gosling was a regular for Blackpool during his three-month stint at the Championship side but has only made three substitute appearances since returning to the Magpies at the start of January.

Tottenham midfielder Andros Townsend was fined £18,000 last June and banned for four months, with three of those months suspended, for breaching betting regulations.

Crystal Palace striker Cameron Jerome, then at Stoke, received a £50,000 fine in August for the same offence.

However, it is believed neither player was charged over bets relating to games in which they or their clubs were involved.

Accrington Stanley managing director Robert Heys was suspended from football for 21 months and fined £1,000 after admitting 735 breaches of FA betting rules in August.