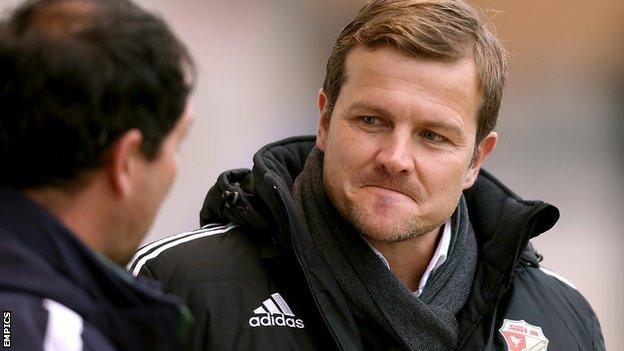 Town reached the League One play-off semi-finals last season, but currently sit 10 points off the promotion places and are without a win in eight games.

"I think a lot of the criticism Mark gets is unfair," former Norwich player Power told BBC Wiltshire.

"We've done really well and it's just been in the last month where form has dropped off."

Former Peterborough boss Cooper was promoted from Swindon assistant to manager in the summer, following the sudden departure of Kevin MacDonald during pre-season.

Town peaked at fifth place in the league in October but now find themselves in ninth and, after one win in 12 games, Cooper has been under pressure to improve their form.

But Power was quick to add: "There's no point in trying to build something and changing your manager every two minutes. I don't think that's the right way to do things.

"If things carried on and carried on we'd have to look at that but that's definitely not on my mind at the moment."

Power became Swindon's third owner in as many years in December.

In January 2013, Andrew Black put the club up for sale because he was no longer willing to invest. The businessman had considered putting the club into administration in order to wipe out £9m of unsecured debt.

A takeover by a consortium, led by former chairman Jed McCrory, was completed a month later and Power came in as a director and part-owner in April.

The playing budget was halved in the summer, as the board aimed to undo the high spending under former manager Paolo Di Canio, and the squad was overhauled.

Power's Swinton 20 Reds have now assumed control and the chairman has worked to improve the club's financial position by investing £2m.

"We've had to tear one team up and start again, and it's the same from top to bottom in the club," added Power.

"I've looked through the history of the football club and that seems to happen quite a lot, so I understand the fans' frustrations.

"Most of the supporters thought we were going to be in a relegation battle. That hasn't been the case.

"Hopefully they can see what we're doing and Mark's a part of that."