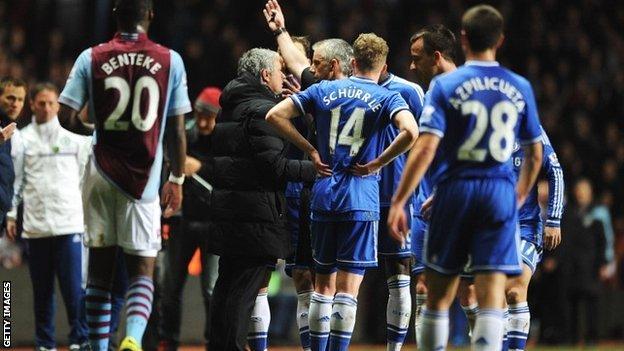 Chelsea boss Jose Mourinho has been charged with improper conduct after being sent off during his side's 1-0 defeat by Aston Villa last Saturday.

Mourinho walked onto the pitch to speak to referee Chris Foy after Chelsea midfielder Ramires was shown a red card late in the game.

Another Blues player, Willian, had also been dismissed earlier in the match.

Mourinho has until 18:00 GMT on Monday, 24 March, to respond to the Football Association charge.

The Portuguese, whose lead at the top of the Premier League was trimmed to four points as a result of the loss, was critical of Foy after the game at Villa Park.

Mourinho said he was trying to speak to Foy because Ramires was pushed by Villa striker Gabriel Agbonlahor, who had been substituted.

"I don't know why I was sent off," Mourinho told BBC Radio 5 live. "I asked, but the referee refused to speak to me."

Mourinho also said he tried to speak to Foy after the game, but that the referee had refused.