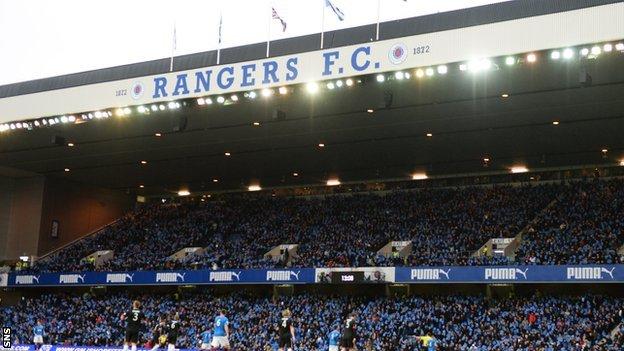 The noise around Rangers has abated.

All parties have now entered a 30-day period in which the board has to produce a business plan that adheres to their public commitments about restoring the club to its former status of title challengers in the top flight and regular European competitors.

So what is the state of play in and around Ibrox? Here are five key questions on the latest chapter of the Rangers saga.

Has peace broken out?

It's more a hiatus. Following their meeting with South Africa-based businessman King on Friday, the Rangers directors issued a statement in which they pledged to reveal a business plan that would allow the team "to compete at the highest levels of Scottish and European football".

This requires significant investment in the football department, which is currently operating without any scouting staff, and in new players. Yet the board also pledged not to use Ibrox Stadium and the Murray Park training ground as security against any borrowing, which leaves investment from existing or new shareholders as the only likely way to raise finance.

King wants to lead that round of fundraising and pointed out that the board of a publicly limited company is bound by its stated commitments.

He urged fans to give the board 30 days to comply, which the Union of Fans (UoF) - a coalition of supporters groups - "reluctantly" agreed to. It certainly represents a less adversarial approach.

What options are there for the board?

It is difficult to see them having any choice but to commit to a fresh share issue. This has always been mooted by the chief executive, Graham Wallace, but without setting any timescale. Existing shareholders would need to reinvest to maintain the size of their stake, though.

If the club is to invest ahead of challenging for promotion from the Scottish Championship and then mounting a title challenge in the Premiership, the question of a share issue would need to be put to a shareholder vote as soon as possible to allow a two-year football strategy to be put in place.

The board has agreed to borrow £1.5m from the shareholders, Sandy Easdale and Laxey Partners, with the loans secured against Edmiston House and the Albion car park, with Laxey also receiving a £150,000 premium in cash or shares.

King revealed in his statement last Monday that the directors told him they had agreed to these terms because they "considered that a combination of legal risk and the current financial position justified the loan terms".

In effect, the financial state of the club meant that the loans ought to be considered high risk. It is clear that Rangers need investment and that the £1.5m is a temporary sticking plaster. Wallace, though, has consistently stated that administration will not occur.

At the annual meeting in December, Wallace told shareholders that he would conduct a 120-day review into the business, with outgoings exceeding revenues while the club is in the lower divisions. This ends in mid-April, but the interim accounts are also due out before the end of March.

So, within the next 30 days, shareholders and fans will have a clearer understanding of the current financial state of the club - it is expected that the interims will show a reduction in the £14m losses suffered in the last financial year - and the board's plan to improve its position on and off the field. This will then allow fans to make an objective decision about season ticket renewals, which will follow.

What if the business plan does not meet expectations, or the board does not fulfil its pledges?

The UoF is pressing ahead with plans to set up a season-ticket trust fund, with lawyers likely to be engaged on the project and trustees appointed thereafter. Before asking fans to wait for 30 days, King had advised them to pool their renewal money, which is the club's single largest income stream, and only give it to the club in return for securing Ibrox and Murray Park to protect them. Existing shareholders will surely also be monitoring events.

Is a resolution likely?

The current board and the shareholders they represent want to stay in place. King wants to invest directly in the club in return for an influence on how the money is spent. A majority of fans at the last home game against Dunfermline Athletic held up blue cards in support of King.

From these three positions, a workable solution needs to be delivered. Conflict is unlikely to resolve anything and ultimately it is finances that will dictate what happens.

Rangers either seek new funding, or cut costs, with the latter likely to make life more testing for the manager, Ally McCoist, and Wallace to deliver a team that can eventually challenge Celtic again, at least in the short-term.