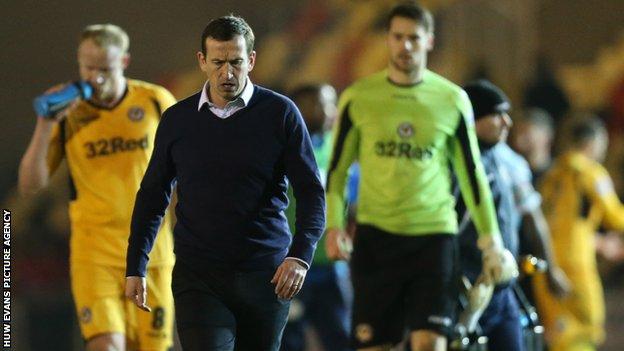 Newport manager Justin Edinburgh admits his side must get back to winning ways or face a relegation fight.

Edinburgh's side were beaten 2-1 at home by Dagenham and Redbridge.

County now have just one win in their last 15 games and are only seven points clear of the League Two relegation zone.

"We're in a very precarious position that if we're not tough enough then we could get caught in what's going on below us," he said.

Chris Zebroski missed a penalty for Newport before Medy Elito's two goals put the visitors in control at Rodney Parade.

Midfielder Robbie Wilmott's free kick made it 2-1 at the end of the first half but captain David Pipe was sent-off late in the game as Newport fell to defeat.

"It is easier said than done but we have nine games now to find two wins to make sure we we don't let all the hard work over the first 22 games fizzle away.

"We cannot keep saying the luck is not with us, we have had enough opportunities but we have not taken them.

"We have to realise that the situation we are now in is very difficult."

Defender Byron Anthony came off after 31 minutes of the game because of injury and Edinburgh confirmed the former Wales Under-21 international had gone for an X-ray.

Anthony only returned to first team action in February after recovering from a double leg break which he had suffered against Brighton in August.