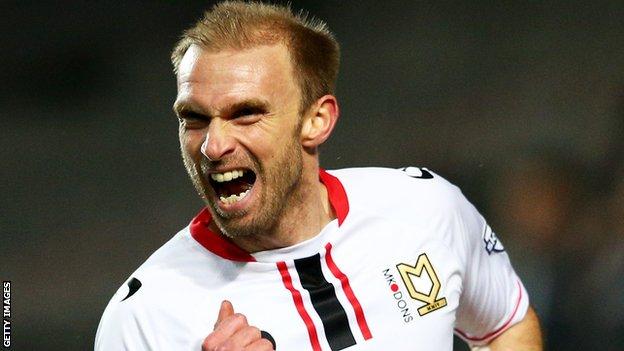 Luke Chadwick has said his debut for hometown club Cambridge United was bigger than playing for Manchester United in the Champions League.

Chadwick came on for the final five minutes of the second leg of Manchester United's Champions League quarter-final against Bayern Munich. Trailing 1-0 from the home leg, United lost 2-1 at the Olympic Stadium and 3-1 on aggregate.

"I remember coming on in a Champions League quarter-final against Munich," he told BBC Radio Cambridgeshire.

"That was quite a nerve-wracking and an incredible experience. But Tuesday is the biggest one now."

Spells at West Ham, Stoke, Norwich and MK followed, but the midfielder has always harboured an aspiration to play for the team he watched as a youngster.

"The missus buys me the Cambridge kit every Christmas or my birthday," he said.

Non-league Cambridge, relegated from the Football League in 2005, are currently second in the Conference Premier.

Chadwick added: "I still think I've got years left in me. My body will tell me when it is time to stop. Ideally, I've got three, four, five or six years left. You never know in this game, I just want to be successful here."