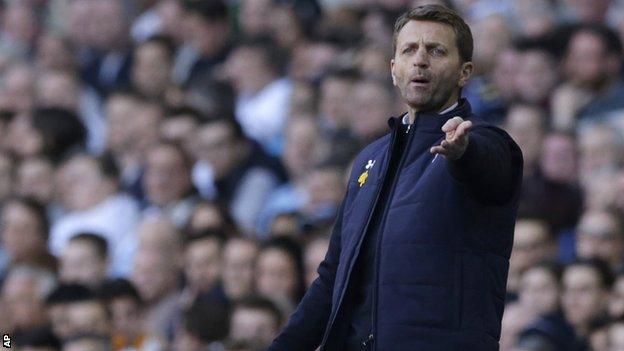 Tottenham manager Tim Sherwood expects to be at the club next season and insists he will have control of transfer policy.

Sherwood, 45, signed an 18-month contract in December, but there has been uncertainty over his future.

"It's out of my hands but I believe I'll be here next year," said Sherwood. "I'm planning for next season. The players are playing for their futures.

"I will sign the players. Nobody else will come in unless I sanction it."

Spurs - who have Franco Baldini as technical director - did not sign a player in the January transfer window after a summer in which seven high-profile signings, including Roberto Soldado, Christian Eriksen and record signing Erik Lamela, were recruited.

The departure of Wales forward Gareth Bale to Real Madrid was one of 12 deals which saw players leave the club.

"The manager has got to work with the players, so unless he gets the players he wants it's always going to be an uphill task," added Sherwood. "He will always have the excuse of, 'well, they're not my players'."

Sherwood, who joined the club as a coach in 2008, guided Spurs to 16 points from a possible 18 after the sacking of Andre Villas-Boas in December, but have struggled to maintain that momentum.

They had lost three games in a row before travelling to Portugal to face Benfica in the Europa League on Thursday.

And even though Sherwood's side ended that losing run by drawing 2-2 in Portugal, they went out of Europe with a 5-3 aggregate defeat.

The former Spurs midfielder recently asked for "patience", but has faced questions about his future.

Netherlands manager Louis van Gaal, who has been linked with the Tottenham job, said on Wednesday his "ambition is to coach a top team in the Premier League".

Sherwood added: "Van Gaal has got a good track record, he is a good manager and I'm sure he'll get his opportunity. He's been shouting loud enough for it."