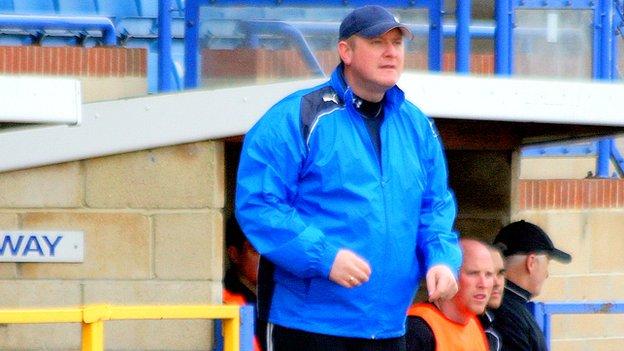 Beadle, 41, takes over from Martin Foyle, who left the club on Wednesday.

The club also confirm that former Bulls manager Colin Addison, now a non-executive director, is to have a closer involvement in first-team affairs.

Beadle, a former striker for Gillingham, Bristol Rovers and Bristol City, will be assisted by his youth team number two Steve Jenkins.

Former Newport boss Beadle is the Bulls' seventh manager in the space of five years.

They are 18th in the Conference, having not won in 10 matches, and have picked up just three points since the end of January.

Addison was player-boss when Hereford famously knocked out Newcastle United in the FA Cup third round in 1972 before gaining election to the Football League the same season.

He returned to Edgar Street as manager for a second spell in 1990.

On Tuesday, chairman David Keyte revealed that the club needed an investment of £300,000 to avoid administration.

But, following Tuesday's 2-0 defeat by Wrexham, he told BBC Hereford & Worcester that all of his players would be leaving the club at the end of the season.