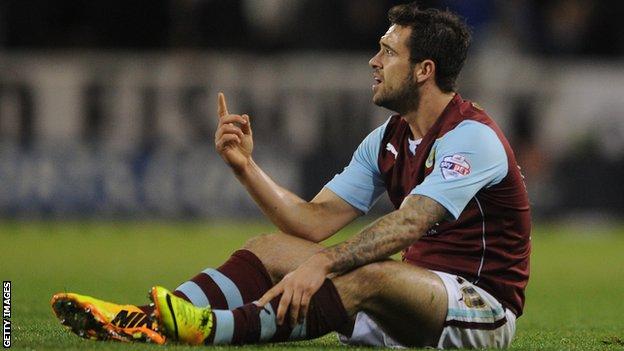 Burnley will be without top goalscorer Danny Ings for "a short spell" because of an ankle problem.

Striker Ings, the Championship's Player of the Year, was injured in the 3-3 draw at Birmingham on 12 March.

The 21-year-old has scored 25 goals this season and his partnership with Sam Vokes has been key to Burnley's rise to second in the table.

The Clarets have a 10-point cushion between themselves and third-placed Derby with 10 games to play.

Dyche continued: "It's still going to be a bit of time but not what we thought. There's nothing sinister, that's the main thing. We're quite happy and Danny's happy."

Ings endured an injury-plagued start to his career at Turf Moor after joining from Bournemouth for a reported fee of around £1m in 2011, suffering two serious knee injuries.

But he has flourished in 2013-14 and has also gained international recognition with England's Under-21 side.