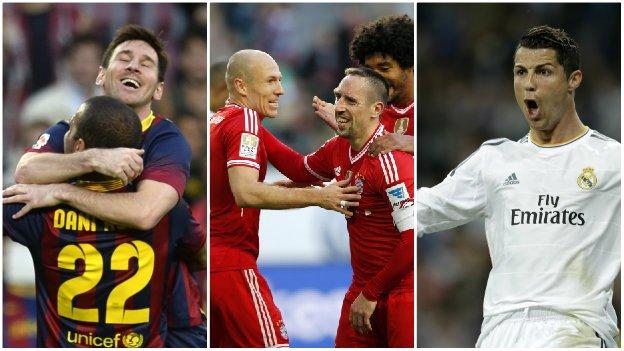 Chelsea and Manchester United will have to conquer some of football's biggest names if they are to add to their tally of Champions League wins.

United will face Franck Ribery, Arjen Robben and Bastian Schweinsteiger at defending champions Bayern Munich, while the Blues take on a big-spending Paris St-Germain side spearheaded by Zlatan Ibrahimovic.

BBC Sport takes a closer look at the quarter-final line-up.

Premier League champions Manchester United, despite their domestic struggles, reached the quarter-finals for the first time in three seasons after overturning a 2-0 first-leg deficit against Olympiakos.

David Moyes's side were paired with the Greek champions after easing into the knockout phase as unbeaten Group A winners. The Red Devils won four and drew two of their matches against Bayer Leverkusen, Real Sociedad and Shakhtar Donetsk.

Key to the tie: German leaders Bayern's danger comes from everywhere - and United will have to deal with Robben facing the banned Patrice Evra's replacement, possibly Alexander Buttner. Yet the biggest threat could be the passes of Thiago Alcantara and Dante from deep, seeking to catch out Rio Ferdinand and Nemanja Vidic.

Route to the last eight: Manchester City may have denied Bayern Munich a 100% record by winning the last group match in the Allianz Arena, but the reigning champions have been impressive, especially in their 3-1 win in October at the Etihad. They then swept aside Arsenal in a repeat of last season's last-16 clash.

Strengths: Plenty. It all starts with Mandzukic's industry at centre-forward, with the opposition relentlessly pressed. Much of the main danger comes from out wide, from Robben and Ribery, although Mario Gotze showed that even the France winger is not irreplaceable by filling in brilliantly for him recently. Defender Dante's long passes can circumvent deep defences, too.

Weaknesses: Are you kidding? The only question is how to distil all the talent into a starting XI. Injuries have saved Pep Guardiola from a lot of tricky choices this season. Any slight defensive concerns appear to have been ironed out by Jerome Boateng's surge in form as well as Guardiola's willingness to use Javi Martinez at centre-back on occasion.

One to watch: Toni Kroos. Guardiola's philosophy is one of multi-tasking, as proved by his use of Philipp Lahm as a midfield anchorman. The 24-year-old Kroos is proving adept in a variety of positions. Having played all over midfield for Bayern, he has now mastered the deeper role. No wonder Guardiola is keen to tie him down to a new deal.

Stat: Bayern share the record for losing finals - five - with Benfica and Juventus. Only Hans-Georg Schwarzenbeck's last-ditch equaliser stopped them losing on their first final appearance, against Atletico in 1974.

Chelsea manager Jose Mourinho's bid to become the first boss to win the competition with three different clubs continued with a comfortable last-16 win against Galatasaray.

After a 1-1 draw in Istanbul, the Premier League leaders eased to a 3-1 aggregate win against the Turkish champions who included ex-Blues striker Didier Drogba in their starting line-up.

Despite home and away defeats against Swiss champions Basel, Chelsea progressed from the first phase as Group E winners by beating Schalke and Steaua Bucharest in each of their other four matches.

Key to the tie: Set-pieces could be central to what should be an intriguing tie. Branislav Ivanovic, John Terry and Gary Cahill could seek to exploit any instances of PSG switching off, while Thiago Motta, Alex and Thiago Silva threaten the same for Laurent Blanc's side - who scored three times from set plays in their opening match of this season's competition against Olympiakos.

Route to the last eight: As with last season, the French champions cruised through with something to spare, despite allowing themselves a late slip against Benfica. Laurent Blanc's men pulverised Bayer Leverkusen in the last 16 to reach their second successive quarter-final.

Strengths: Even under ex-Blues boss Carlo Ancelotti last season, PSG's illustrious line-up always seemed more suited to Europe than their own domestic league. Under former Manchester United defender Laurent Blanc, they have begun to give masterclasses in possession. Only Barcelona have passed the ball as accurately in this year's Champions League. Their midfield three is incredibly versatile. Then they have £50m summer signing Edinson Cavani and Sweden captain Ibrahimovic, who have scored 61 goals between them in all competitions this season, up front.

Weaknesses: Unusually for a team marshalled by the imperious Silva, French leaders PSG had a few gremlins at the back in the middle part of the season. Between November and February, they conceded some avoidable goals, particularly from set-pieces.

One to watch: Lucas Moura. The 21-year-old winger has had a mixed time since arriving in the French capital, but no player in Ligue 1 creates goals as frequently as the Brazilian. His pace and dribbling power could be crucial in tight matches, as he builds towards the World Cup.

Stat: Real Madrid had already been European champions on six occasions before Paris St-Germain were founded in 1970.

Key to the tie: The three meetings between the Spanish pair so far this season have been tight; all drawn, with a total of two goals overall. Perhaps David Villa (13 in 24 La Liga starts) could make the difference against his old club Barca, who are currently third in La Liga and trail second-placed Atletico by one point.

Route to the last eight: Tata Martino's team had a tranquil passage from a group containing four former European champions in AC Milan, Ajax and Celtic, but lacking much genuine quality.

Strengths: If many consider their star to be on the wane, Barca showed against Manchester City that they still know how to control in the Champions League. It's little wonder given they have won three of the last eight editions and also reached four semi-finals in the same time. Argentine superstar Lionel Messi's freshness after an extended injury lay-off could also be decisive.

Weaknesses: It is clear that they do not carry the same aura as they did when Pep Guardiola was in charge. Recent off-pitch instability has affected the club, while the star names are simply getting older. Veteran centre-back Carles Puyol has been badly missed through injury, which means the defence can lack leadership on occasion.

One to watch: Alexis Sanchez. The Chilean has yet to really hit top form in this season's Champions League, but he has been excellent in La Liga, scoring 17 times in 20 starts and creating seven more. After a disappointing last campaign, he has the ability to provide a potentially decisive forward option outside Messi.

Stat: For once, Barcelona are not leading the possession stakes in this season's competition. They have an average of 67.2% in the matches to date, but Bayern have 69.2%.

Route to the last eight: Atletico were, along with city rivals Real Madrid, the joint-highest point scorers in the group stages with 16. Their swagger in the competition, which continued in the two-legged win over AC Milan, belies a relative inexperience in it.

Where the last eight stand in their domestic leagues

Strengths: Their incredible toughness and spirit, epitomised by their charismatic Argentine coach Diego Simeone, who was involved in the incident that saw David Beckham sent off in the 1998 World Cup, makes them able to grind out results even when the going gets tough. In a squad with excellent quality throughout, top scorer Diego Costa perhaps epitomises this best. The 25-year-old Spanish international (who has also played in two friendlies for Brazil) bends the rules, but can conjure magic in an instant.

Weaknesses: The lack of experience is a concern, even if they have 32-year-old Spain striker David Villa in the ranks. Simeone already looks like an outstanding coach, but the Champions League last eight - especially such a strong line-up as this - is a step into the unknown in his managerial career.

One to watch: Gabi. The 30-year-old captain is not the biggest name in the line-up, but the Calderon youth product is a master of breaking up opposition moves in front of the defence. He also creates goals with his excellent set-piece deliveries and has plenty of targets in Costa, Miranda and Diego Godin.

Stat: No team in this season's competition makes more tackles than Atletico, who average 24.5 per game.

Key to the tie: This could be the moment where Gareth Bale takes centre stage. Stationed on the right and with Marcel Schmelzer injured, the Wales international could make hay against a makeshift stand-in, probably Kevin Grosskreutz or Marvin Ducksch.

Route to the last eight: Carlo Ancelotti's side cruised through a group containing Juventus and Galatasaray. Yet the most frightening thing for their opponents is that they have improved markedly since their 6-1 opening-night win in Istanbul. With 29 goals to their name, the competition's top scorers then dismantled Schalke to reach a fourth successive quarter-final.

Strengths: The front three of Cristiano Ronaldo, Gareth Bale and Karim Benzema really clicked into gear in the away leg at Schalke. The pace and power of Ronaldo and Bale combined with the awareness of Benzema is a heady mix, although 13-goal Ronaldo is clearly capable of winning games on his own.

Weaknesses: Very few. Injuries in the full-back positions at various points of the season - firstly to Marcelo and Fabio Coentrao, now to ex-Liverpool defender Alvaro Arbeloa - suggests the best way to attack El Real might be down the flanks.

One to watch: Angel Di Maria. Many assumed the Argentina star would be the fall guy when Bale arrived. Di Maria was even mooted as a makeweight in the deal with Tottenham, but it seems preposterous now. The 26-year-old's pacy dribbles and passing have contributed well, from a new position in Ancelotti's midfield trio.

Stat: Los Merengues participated in the two highest-scoring European Cup finals. In 1960, they beat Eintracht Frankfurt 7-3 at Hampden Park, but they lost 5-3 to Benfica in Amsterdam two years later.

Route to the last eight: Last year's finalists showed their mettle in getting through an arduous group containing Arsenal, Napoli and Marseille. Jurgen Klopp's team overpowered Zenit St Petersburg in the opening leg of the knockout round in Russia before rather limping over the line in the return.

Strengths: Their counter-attacking power has only been enhanced by the arrivals of Henrikh Mkhitaryan and Pierre-Emerick Aubameyang. They can cut teams apart in seconds. The legendary spirit engineered by Klopp has largely endured some key departures and a catalogue of injuries this season.

Weaknesses: Defensive, mainly. It seems harsh to judge a defence which has been beset by injuries to its key figures for most of the season, but the generally excellent Mats Hummels still suffers concentration lapses. Dortmund also miss too many chances when dominating opponents.

One to watch: Pierre-Emerick Aubameyang. The Gabon striker scored a hat-trick on his Bundesliga debut against Augsburg. Although he has been in and out of the starting XI, his pace and ability to create, as well as score, from the right provides a contrast from the injured Jakub Blaszczykowski.

Stat: Of the teams in the last eight, only Bayern and Real Madrid average more shots per game than Dortmund's 15.1.