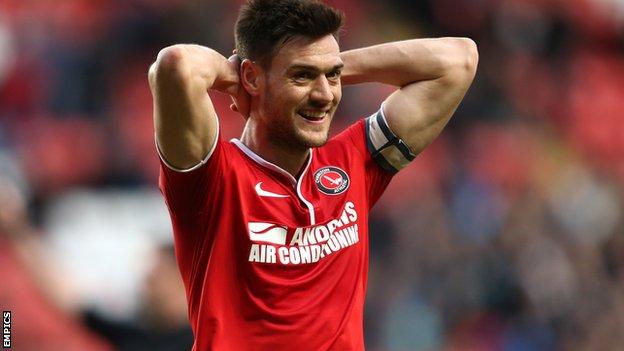 Charlton Athletic captain Johnnie Jackson is determined to lead the side to survival in the Championship.

The Addicks climbed out of the drop zone after a 1-0 win over Bournemouth.

"I think we can do that. Myself and the rest of the boys feel we have enough to do it. I feel I owe it to the fans and the club to help turn it around."

Tuesday's win over the Cherries - which was just Charlton's second league victory since the turn of the year - lifted the south-east London side out of the bottom three on goal difference.

It was a strange time when Chris Powell left as myself and all the boys have a lot of respect for him. As players you get on with it - the most important thing is to get Charlton safe

They are level on points with 22nd-placed Millwall and two points ahead of Yeovil but have three games in hand on both of those sides.

The Addicks are playing catch-up following a string of postponements at The Valley and an FA Cup run which saw them reach the competition's last eight.

"With one win you jump outside the bottom three and things start looking up," 31-year-old midfielder Jackson said.

"We went bottom of the league without playing a game and felt hard done by. We play Saturday-Tuesday every week now and are going to need a squad."

Jackson, a former Tottenham trainee, signed a new two-year deal with Charlton last week and says the playing squad must try and put recent managerial changes at the club to the back of their minds and concentrate on results.

Riga is unbeaten since taking charge, having seen the side draw 0-0 in his first two matches and then securing his first win over Bournemouth.

"It was a strange time when Chris Powell left as myself and all the boys have a lot of respect for him," Jackson said.

"It is the nature of football; we have seen it before and we will see it again. Managers and players come and go.

"As players you get on with it. The job in hand doesn't change.

"We need to get out of it, regardless of who is in charge and the personnel. The most important thing is to get Charlton safe.

"We are not conceding a lot of goals so we have got a good foundation to build on if we can start putting the ball in the goal."