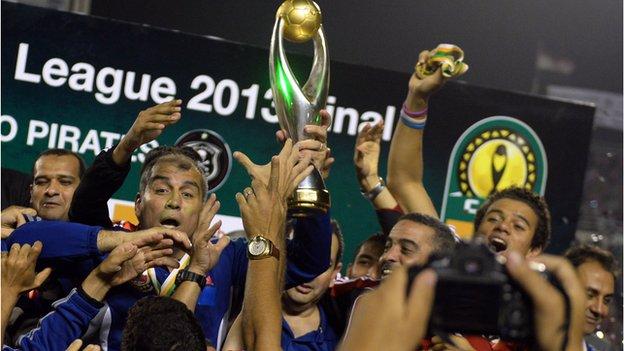 South African outfit Kaizer Chiefs were left stunned in the first leg of their African Champions League last sixteen tie, after Vita Club's Ndombe Mubele hit a hat-trick to give the Congolese side an emphatic 3-0 victory.

The match was staged in the Democratic Republic of Congo's Kinshasa stadium - the very same venue where Muhammad Ali knocked out George Foreman in the 1974 'Rumble in the Jungle'.

Elsewhere, the Egyptian duo of Zamalek and holders Al Ahly both struggled in the first leg of their ties.

Zamalek were held to a 0-0 draw away to Nkana of Zambia, whilst holders Al Ahly suffered a 1-0 defeat away to Libya's Al Ahli Benghazi.

Zamalek, however, have history on their side against the Zambians. They have met Nkana four times in the African club showpiece and the Cairo 'White Knights' have triumphed on aggregate every time.

It is a point that wasn't lost on the Nkana coach Masauso Mwale who, before the match, had said it was crucial for the 1990 Champions League runners-up to build a commanding first-leg lead at their rudimentary 10,000-seat stadium.

Zamalek are among six Champions League title-holders still challenging for the trophy this season.

Their fellow Egyptians and current holders Al-Ahly were left stunned in Libya, after they fell to a solitary second-half goal scored from Zimabwe striker Edward Sadomba (pictured).

The win was a superb result for Benghazi, who had to surrender home advantage and play the game in Tunisia because of security concerns.

It gives them a solid platform for the return leg next week as the two sides battle to qualify for the group stages of the tournament.

Ahly, who have won the competition for the last two years, again struggled up front - an issue that has been a problem for them all season.

The Libyan side eventually took advantage in the 67th minute when Sadomba kept his composure to slot past the keeper after Wael Gomaa failed to clear a knock-down from a long free-kick into the box.

Elsewhere, two-time title-holders Esperance held giant-killers Real Bamako to a 1-1 draw in Mali. Haythem Jouini put the 'Blood and Gold' ahead midway through the opening half and Moussa Doumbia levelled for Real 12 minutes from time.

TP Mazembe, of DR Congo left Sewe San Pedro in Ivory Coast with a precious away goal, losing 2-1, whilst Horoya, shock winners over 2013 Club World Cup runners-up Moroccans Raja Casablanca, could not make use of home advantage, going down 1-0 to Tunisians CS Sfaxien.

El Hadi Belameiri scored in injury time at the end of the first half to give Algerian side Entente Setif a 1-0 win over Cameroon's Coton Sport.