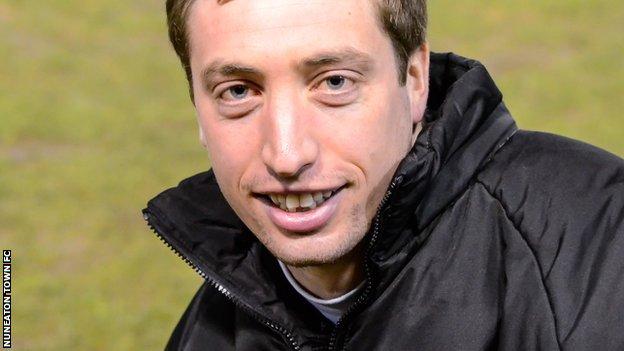 Noon, 30, had been assistant at Liberty Way to Kevin Wilkin, who was appointed Wrexham boss on Thursday.

The ex-Coventry City trainee, who joined Boro in 2004, helped the club to promotion from the Southern League to the Conference Premier in 2012.

Noon has only been been number two at Nuneaton Town to Kevin Wilkin since December 2013 when he replaced Mickey Moore - who left to join Mansfield Town as first-team coach.

In his 10 years with Nuneaton, Moon has been a linchpin in midfield captaining the side to three promotions since 2008.

He takes charge at Nuneaton with them in fourth place in the Conference Premier.

He will be assisted by left-back Simon Forsdick at the fourth-placed side.

Former Telford player Forsdick, also 30, has been part of the Boro backroom staff after suffering a serious injury during pre-season, which has prevented him from playing this campaign.

''We have solid foundations and strength of depth at the club both with backroom staff and in the dressing room," said Boro chairman Ian Neale.

"We will look to harness that desire and ambition from within in order to chase down a place in the play-offs."