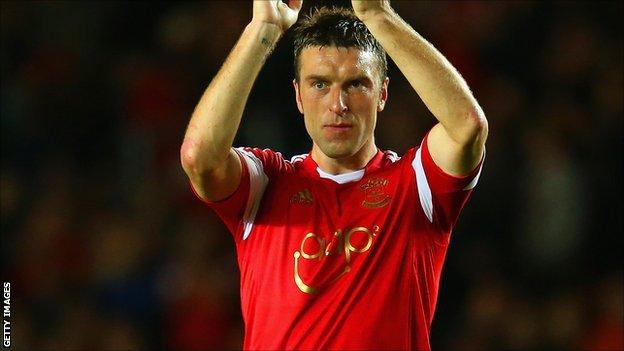 Southampton striker Rickie Lambert says they are battling Manchester United for a seventh-place finish in the Premier League this season.

Saints are three points behind the champions having played a game more.

They host United on the final day and Lambert has set his sights on them.

"If we can play Manchester United on the final game of the season with the chance to overtake them then that will be some season and one hell of a game," Lambert told BBC Radio Solent.

Saints due a United win?

Southampton have not beaten Manchester United since James Beattie scored in a 1-0 win in the Premier League August 2003.

In the nine matches since - including three FA Cup ties - United have won eight times.

"We've managed to get into eighth, so now we're looking at seventh. If we get seventh, we'll be looking at sixth."

Lambert, 32, has nine goals in the Premier League so far this campaign, having been the joint top-scorer with Frank Lampard last season with 15.

He has set himself a personal target of improving his tally as he looks to secure a place in England's World Cup squad.

"It's been one of those seasons where it's been hard to come by a goal," he said.

"Things have changed - we're playing differently - but I'm not one to make excuses.

"I'm disappointed with the chances I've missed - and I've missed a few. So that has frustrated me. There are still few games to rectify that."