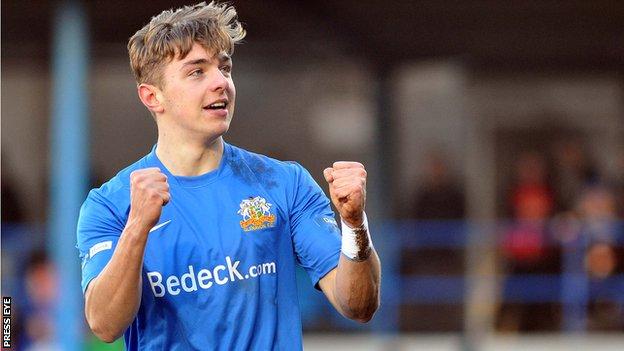 Teenage striker Robbie McDaid has moved from Irish League side Glenavon to Leeds United on a two-year deal.

The 17-year-old impressed in a trial game last month, scoring twice for the Leeds under-17s team.

"He's a great signing for us. It's a real coup given the interest in him from a lot of clubs," said Neil Redfearn, Leeds development coach.

"He knows his position and the most important thing as a striker is that he knows where the back of the net is."

"He's done really well for Glenavon, and because he has been playing senior football for a while, he's already got that experience, and the transition should be easy to cope with," Redfearn told the club website.

The Nothern Ireland youth international came off the bench to score a double for Glenavon in a 4-2 win against derby rivals Portadown last month.

"There were a number of clubs interested in him and it's a credit to everyone here that he's agreed to join us on a two-year contract.

"We always speak about the importance of developing and recruiting young players, and Robbie is a player our coaches are excited about working with."

As part of the deal, Leeds will play a friendly against Glenavon this summer.