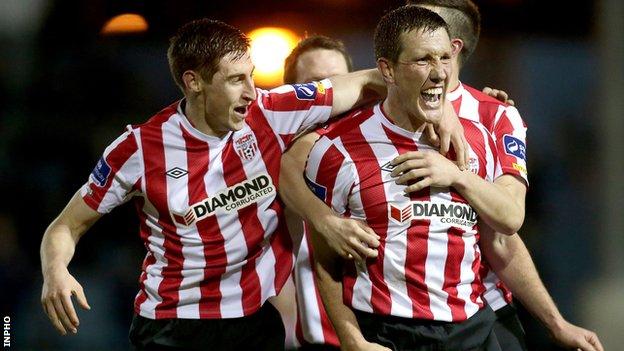 Derry City are still searching for their first win of the League of Ireland season after being held to a frustrating 1-1 draw in Drogheda.

Michael Duffy saw a superb effort pushed on to the Drogheda bar in the first half while Rory Patterson also missed two good chances.

Straight after the break, Michael Daly put Drogheda ahead before Cliff Byrne levelled with 14 minutes left.

Patterson had a late effort ruled out for offside as Derry chased victory.

Derry had the majority of possession in the early stages and were unlucky not to take the lead on 18 minutes as Duffy beat three Drogheda defenders before seeing his brilliant effort pushed on to the woodwork by keeper David Ryan.

Then on 25 minutes, Patterson headed a Mark Stewart cross just over the top and last season's leading League of Ireland Premier Division scorer missed another chance on 32 minutes.

Somewhat inevitably, Derry paid for those misses as Daly volleyed home a minute after the restart after Alan McNally had nodded on a corner.

Derry should have levelled on 55 minutes as Ryan somehow blocked a point-blank Mark Stewart effort with Duffy blasting the follow-up over the bar.

Patterson dragged another Derry chance wide on 71 but Roddy Collins's side finally did get on terms five minutes later as Byrne scrambled home after Drogheda keeper Ryan had failed to gather a corner.

Striker Patterson did find the net on 80 minutes but his effort was ruled out for offside.

Derry continued to be camped in the Drogheda half for the remainder of the game but the winner didn't come as Collins still waits for his first Candystripes victory.

The draw leaves Derry 10th in the table and they are five points behind joint-leaders Shamrock Rovers and Cork City.