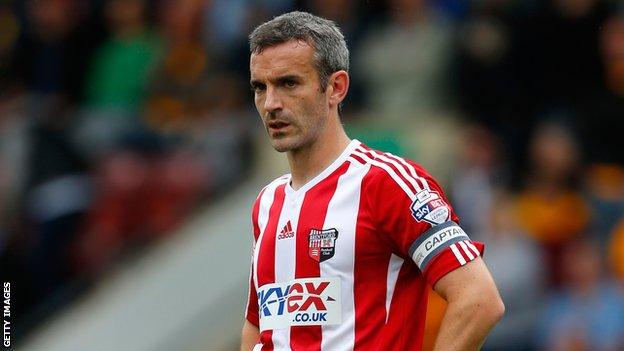 Brentford club captain Kevin O'Connor has signed a new one-year contract with the League One side.

The 32-year-old has made 496 appearances for the Bees during the course of his 15-year professional career at Griffin Park.

The Irish midfielder, who can also play in defence, is fourth on Brentford's all-time appearance list.

O'Connor will also take on coaching responsibilities as part of his new deal with the west London side.

A product of Brentford's youth academy, O'Connor signed professional forms in 1999 and made his senior debut in February the following year.

He has featured nine times for the Bees this season and manager Mark Warburton said it was crucial to keep a man of his experience at the club.

"Kevin has seen so much significant change at the club and yet has maintained his exceedingly high standards throughout," Warburton told the club website.

"It is this outstanding quality that we need to keep at Brentford.

"Kevin will continue his playing career but combine his training and playing duties with his pursuit of the relevant coaching licences and spending time working with both the first team and academy staff.

"We will work closely with Kevin on a day-to-day basis and ensure he is given every opportunity to build a solid foundation for the next stage of his career.

"However, it is important for me to stress that he will remain a valuable member of the playing squad and his immediate focus will be on preparing himself for competition as and when he is selected. "