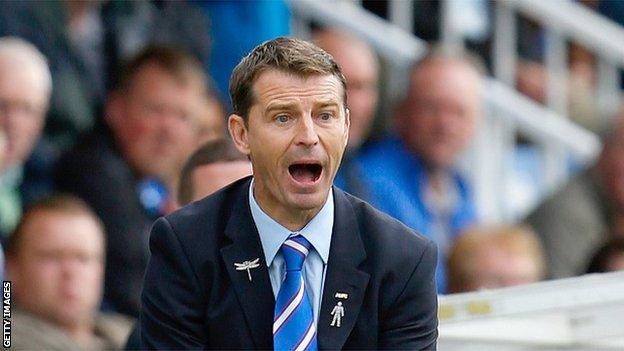 Hartlepool manager Colin Cooper believes a run of consecutive wins is the key if his side are to force their way into the League Two play-offs.

Pools are currently 10th in the table having only managed back-to-back wins once since November.

Cooper told BBC Radio Tees: "That's how Plymouth bridged the gap and that's what we have to do."

Hartlepool travel to Oxford on Friday five points behind the Pilgrims, whose recent form has lifted them to seventh.

"It won't be the end of the world if we don't win, but it will make it more difficult," said Cooper.

"It will be tough though. We're going to a team above us in the league and, even if they haven't won many at home of late, I'm sure they'll be looking to right the wrongs of their previous result [a 3-0 defeat] against Chesterfield."

Cooper will be without Andy Monkhouse, after scans confirmed the experienced winger strained a hamstring during last week's 4-0 win over Bristol Rovers.

"Andy has been a big part of the team and the squad this season so it's disappointing, but it provides an opportunity," said Cooper.

"I have to say Jack Compton came in and did smashing on Saturday and it'll be difficult to change the team [for Oxford] after the way it played against Bristol Rovers. It's Jack's opportunity to be a spark and the catalyst that keeps us on the front foot."

At 25, Cardiff-born Compton is a relatively senior member of a squad characterised by the number of young players.

He will come into a midfield that features 17-year-old Brad Walker, who earlier this week was named League Two apprentice of the year - the second year in a row the award has been won by a Hartlepool apprentice, following striker Luke James in 2012-13.

"They're both smashing young men as well as players, they want to learn, and for Hartlepool to be producing that standard of player is a real pat on the back for the youth set-up," added Cooper.

"This is a club that has to produce players capable of getting into the first team. The staff know the type of players I want and hopefully the conveyor belt will continue."