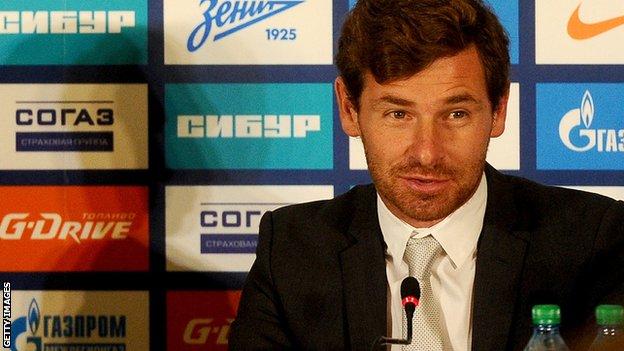 Andre Villas-Boas has set his sights on winning the Russian Premier League after taking charge of Zenit St Petersburg on a two-year contract.

The 36-year-old, sacked by Tottenham in December, agreed the deal with Zenit earlier this week, and was confirmed in his new post on Thursday.

"My goal is to bring Zenit to the top," Villas-Boas said.

Out of Jose Mourinho's shadow

The former Chelsea manager replaces Luciano Spalletti, who was sacked on 11 March after a run of one win in 11 matches.

And Villas-Boas believes he can guide Zenit - who still have to face Lokomotiv in Moscow in May - to their fifth league championship.

"The first step is to win the Russian league," he said. "That's the main thing now.

"If we win all nine matches, Zenit will be champions. My goal is to bring Zenit to the top. That's what I want to do."

Villas-Boas watched from the stand in as Zenit exited the Champions League at the last-16 stage on Wednesday.

Interim boss Sergei Semak guided them to a 2-1 victory on the night against Borussia Dortmund in Germany, but Zenit went out 5-4 on aggregate.

Villas-Boas thanked Semak for restoring a winning spirit to the team, but expects to bring in his own backroom staff.

He said: "Obviously I need assistants who suit my philosophy of the game, who can build team play from my point of view.

"I'm thankful to the people who worked during the interim period, but changes have to be made."

Villas-Boas, who had been out of work since leaving White Hart Lane, did not hesitate to accept Zenit's offer.

He added: "To be honest, there was no difficulty in taking this decision for me, because Zenit is a well-known club in Europe.

"The ideas that led to this decision suit my own ideas about football. This is an important step for me, that suits my ideas, and my career."