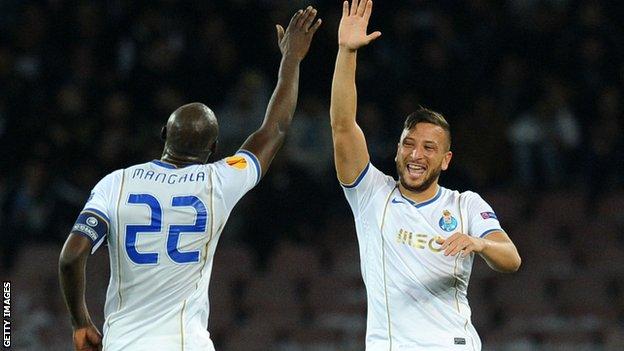 Rafael Benitez's hopes of a second successive Europa League title were ended as his Napoli side were knocked out in the last 16 by Porto.

Benitez won the trophy with Chelsea last season, but the Portuguese champions' 2-2 draw in Naples earned a 3-2 aggregate win to eliminate Napoli.

Andrea Pirlo scored the only goal for Juventus to secure a 2-1 aggregate victory over Fiorentina.

Napoli, who beat Swansea in the last 32, trailed 1-0 after last week's first leg in Portugal, but levelled the aggregate score when Goran Pandev collected a superb pass from Gonzalo Higuain to slot past keeper Fabiano.

Porto - with reserve-team coach Luis Castro in charge until the end of the season following the sacking of manager Paulo Fonseca - sealed victory with two goals in seven second-half minutes.

Nabil Ghilas collected an excellent through ball from Fernando to steer in the first with 21 minutes to go, before Ricardo Quaresma ended a mazy run by lashing a shot past Pepe Reina into the top corner.

Benfica will be Portugal's other representatives in the last eight after a 2-2 draw at home to Tottenham sealed a 5-3 aggregate win.

Pirlo's influence proved crucial as Serie A leaders Juventus maintained their hopes of playing in this season's final, which will be played at their home ground.

Having drawn the first leg against Fiorentina 1-1 in Turin, Antonio Conte's side were in danger of going out on away goals until the match turned in their favour with just under 20 minutes to go.

First, Fiorentina captain Gonzalo Rodriguez - already on a booking - was sent off by referee Howard Webb for fouling Fernando Llorente on the edge of the penalty area.

And veteran Italy playmaker Pirlo, 34, thumped the resulting free-kick into the top corner, four days after winning Juve's Serie A match at Genoa with a similar set-piece.

There was controversy in Austria as Basel's 2-1 win at Red Bull Salzburg - which followed a goalless first leg - was overshadowed by crowd trouble that held up the match for 13 minutes.

Basel, down to 10 men after the sending off of Marek Suchy, trailed to Jonatan Soriano's goal at that point, and were lucky not to go down to nine men early in the second half when defender Arlind Ajeti escaped with a yellow card for a headbutt on Salzburg striker Alan.

The Swiss champions fought back after that with goals from Marco Streller and Gaston Sauro, before Alan was dismissed late on as the match ended 10-a-side.

Lyon survived a scare to go through 5-3 on aggregate against Viktoria Plzen, despite losing the second leg 2-1 in the Czech Republic.

Daniel Kolar and Stanislav Tecl scored for the Czech champions after Bafetimbi Gomis had scored right on half-time for the French Ligue 1 side.

And Plzen could have made it a really tense finish had Tecl not hit the post with a penalty 20 minutes from the end.

Sevilla overturned a 2-0 first-leg deficit away from home against Spanish city rivals Real Betis to go through 4-3 on penalties.

Goals from former Arsenal forward Jose Antonio Reyes and Carlos Bacca levelled the aggregate score at 2-2 - although Vitolo failed with Sevilla's first penalty of the shoot-out. Alfred N'Diaye and Nono missed Betis's final two spot-kicks to send the visitors through.

Elsewhere, AZAlkmaar made the last eight by drawing 0-0 away to Anzhi Makhachkala and sealing a 1-0 aggregate win, while Valencia beat Bulgarian champions Ludogorets Razgrad 1-0 on the night and 4-0 overall.

The draw for the quarter-finals will take place in Nyon, Switzerland, on Friday at 12:00 GMT.