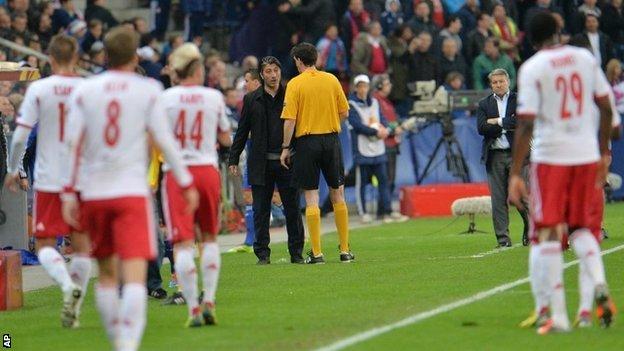 Basel were trailing 1-0 on the night and on aggregate when the two teams were led off in the 30th minute.

Basel captain Marco Streller and club president Bernhard Heusler both appealed to their fans for calm before the game continued.

The Swiss side, down to 10 men for most of the match, made it through to the last eight with a 2-1 aggregate win.

Referee Manuel Grafe decided to lead the players off the pitch when Salzburg's Kevin Kampl attempted to take a corner-kick close to the away fans' section and was almost hit by a drinks bottle.

An announcement over the public address system was followed by personal pleas from Streller and Heusler to their supporters. 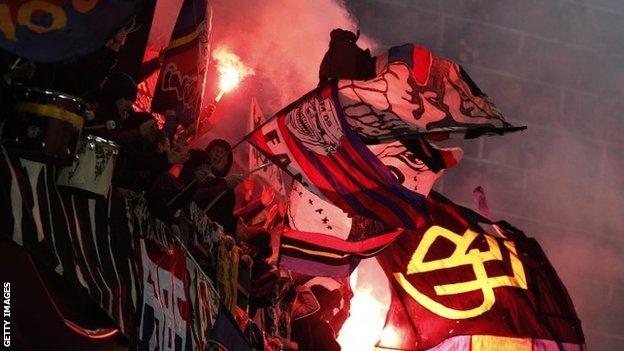 Uefa fined Lazio £120,000 during last season's tournament for a range of offences, including supporters throwing objects onto the pitch, in their matches against Tottenham and Maribor.

The Italian club were also warned they would have to play at least two games behind closed doors if they transgressed again.

In 2005, Inter Milan were fined £132,000 and ordered to play their next four European matches behind closed doors after crowd trouble brought their Champions League quarter-final second leg against city rivals AC to a premature end.

Basel were fined £25,000 earlier this season after protestors interrupted their Champions League match against Schalke by abseiling off a stand roof with a banner protesting against one of the tournament sponsors.