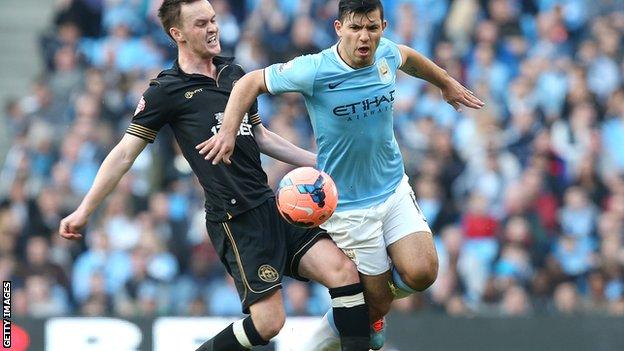 The 25-year-old sustained the injury in the 2-1 defeat at Barcelona nine days ago and has "no chance" of facing Manchester United at Old Trafford according to manager Manuel Pellegrini.

"Maybe next week he will start working with the squad," said Pellegrini, 60. "Maybe the end of the week."

Pellegrini's side are six points behind leaders Chelsea but have three games in hand and can call on strikers Edin Dzeko and Alvaro Negredo as cover for Aguero.

The Argentine has 26 goals this season but has missed two spells with calf and hamstring problems.

Pellegrini also responded to reports linking Aguero with a move to Barcelona by insisting the player "is very happy" at City and that the club "is also very happy with him".