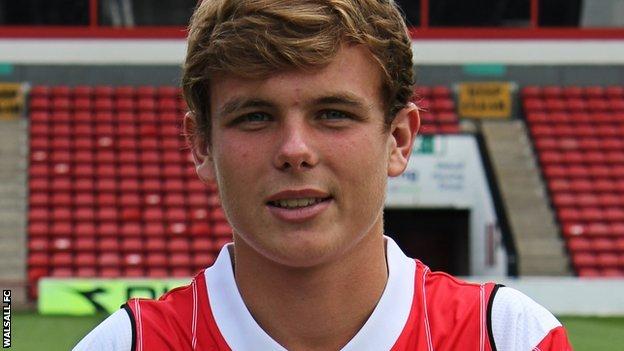 Walsall have given a first professional contract to Liam Kinsella - the teenage son of former Saddlers midfielder Mark.

The 18-year-old has been rewarded for his efforts both in the Walsall youth team and their reserves.

"He has developed at a really pleasing rate. We've seen enough to offer this deal," said Saddlers boss Dean Smith.

"Liam has worked extremely hard over the past 18 months or so. He has all the attributes required to fit in to what we are trying to achieve here."

Mark Kinsella, who briefly managed the Saddlers as caretaker boss in 2006, made over 500 career appearances over spells with Colchester United, Charlton Athletic, Aston Villa, West Bromwich Albion, Walsall and the Republic of Ireland.

And his son knows that he has a long way to match his father's career.

"I know that the hard work is only just starting," said Kinsella Jnr. "It's time for me to knuckle down and continue to learn.

"But seeing so many lads come through the ranks here and make it into the first team really motivates me.

"I look at what the likes of Jamie Paterson have gone on to achieve and I know that I'm at the right club to develop me as a player.

"I certainly have the desire and willingness to work.

"The set-up and the coaching staff that are in place here will give me every chance to progress and I intend to take this opportunity.

"I have been with the club for ten years, but working under Neil Woods, the academy manager, and Graham Biggs, the head of academy coaching, has really seen my positional play and tactical awareness improve."