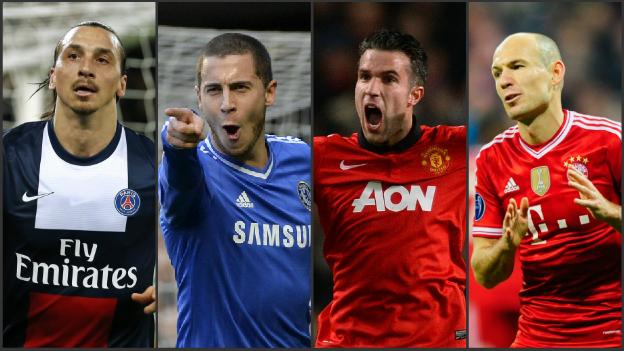 Manchester United have been drawn against holders Bayern Munich in the Champions League quarter-finals, while Chelsea face Paris St-Germain.

The first legs will be played on 1-2 April, with the return matches on 8-9 April.

This year's final is to be held at Benfica's Estadio da Luz in Lisbon on Saturday, 24 May.

United overturned a 2-0 deficit against Olympiakos to book their spot in the last eight, while Chelsea saw off Turkish side Galatasaray.

Premier League champions United beat their Greek opposition 3-0 in the second leg on Wednesday to provide some much-needed relief for manager David Moyes and his players, who are struggling in seventh in the Premier League.

But they now play Bayern, with the first leg at Old Trafford, and Moyes believes the German league leaders - who beat Arsenal 3-1 on aggregate in the last 16 - are favourites to win the competition and retain their European title.

"I was thrilled we were in the draw and that we are in the quarter-final of the Champions League," said the Scot.

"I have to say we have probably drawn out the favourites and holders of the competition. It is a really tough draw for us but one I am looking forward to.

"Manchester United have been handed arguably the toughest draw of all against Bayern.

"Pep Guardiola's side have already demonstrated their class against Manchester City and Arsenal this season and United's status as outsiders for the tournament will only be cemented after the draw against the Bundesliga superpower on a mission to become the first club to retain the Champions League.

"United manager David Moyes suggested his side might now be in with a chance of making further progress into the Champions League after overcoming Olympiakos. The unmoved odds of 20-1 on United winning the tournament paint a more realistic picture.

"Chelsea's task is slightly easier against the big-spending PSG, inspired by Zlatan Ibrahimovic. Jose Mourinho will approach this tie with guarded optimism, especially with the second leg at Stamford Bridge.

"Ibrahimovic has never enjoyed the greatest of fortunes against English clubs in Europe and while Mourinho, predictably, is keen to paint Chelsea as outsiders, he will believe this draw has handed him a real opportunity of reaching another Champions League semi-final."

"If you are old-fashioned, you would always say you want to be at home in the second leg. I have to say that would be the preference. We just have to take it."

It is a rematch of the 1999 Champions League final, when late goals from Ole Gunnar Solskjaer and Teddy Sheringham won the trophy for Sir Alex Ferguson's side.

Bayern beat United on away goals in the 2009-10 quarter-finals, ending the English club's hopes of reaching a third successive final.

"We can't allow Manchester United's current position in the Premier League table to affect our mindset for this game," said Bayern skipper Philipp Lahm after Friday's draw in Switzerland.

"We'll travel to Manchester to play attacking football and score goals. I don't think it matters if you play the away leg first."

Premier League leaders Chelsea will travel to the French capital to play PSG in their first leg.

The Ligue 1 champions, with Sweden striker Zlatan Ibrahimovic as their spearhead, are eight points clear of nearest rivals Monaco as they aim to retain their domestic title.

Spanish leaders Real, with Cristiano Ronaldo and Gareth Bale in blistering form, brushed aside Schalke 9-2 on aggregate in the last 16 and now face German opposition again after being drawn against last season's runners-up Dortmund.

Atletico Madrid, who are second in La Liga, are rewarded for a comfortable 5-1 aggregate win against seven-time European champions AC Milan with a tie against domestic rivals Barcelona.

The sides drew 0-0 in their league meeting at Atletico's Vicente Calderon stadium in January.