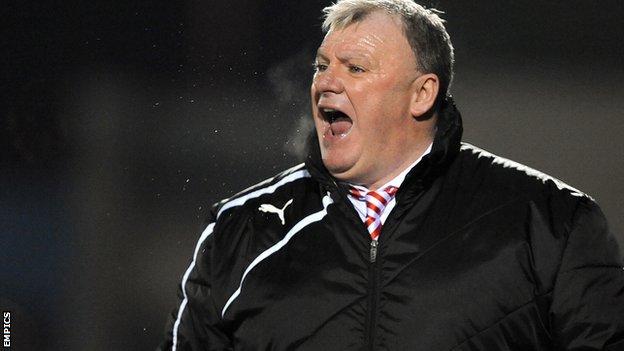 Manager Steve Evans believes Rotherham will soon be capable of competing for a place in the Premier League.

Last Saturday's draw with Walsall was his 100th game as the League One side's boss after taking over in April 2012.

"In another 100 games I genuinely think we could be in the Championship with the objective to be in the Premier League," he told BBC Radio Sheffield.

"It's certainly a realistic aim for us to be in the Championship in that time."

The last time Rotherham gained promotion from the bottom division of the Football League in 1999/2000 they went straight through the third tier the following season.

He added: "If you look at Blackpool, who had a season up in the Premier League and Wigan, who got there thanks to [owner] Dave Whelan's drive, and ask yourself 'who is bigger, us or either of them?', then I would say us.

"The progress has been staggering both on and off the pitch. The chairman, Tony Stewart, has put a stadium and training facilities in place and then said he wanted a team to match that."

Evans has overseen the club's move to the New York Stadium and helped them to promotion from League Two last season.

The Millers are currently fifth in League One with 10 matches remaining.

The 51-year-old, who was linked with the managerial vacancy at South Yorkshire rivals Sheffield Wednesday in December, believes he has received the recognition he deserves for the job he has done.

"I think people in football have taken notice of what I've done and that's why I've had three offers from teams higher up the league since I came here," the former Boston and Crawley boss said.

"I've only achieved a small part of what I believe I can do here and things are very progressive."