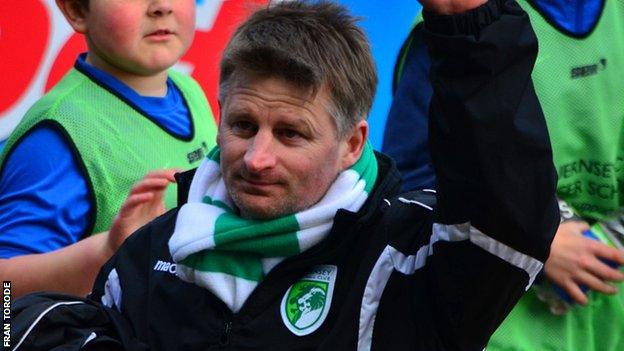 Guernsey FC boss Tony Vance says his players' commitment to the cause is one of the secrets of their success.

The Green Lions beat Whitstable Town on Thursday and the squad, who are all amateurs, stayed in the UK to prepare for Saturday's game against Peacehaven.

"I can't commend them enough for their commitment," he told BBC Guernsey.

"They've all got families and they've all taken a day off work to stay in the UK and recover to give themselves the best chance."

This game will show where we're at...it's a game we can win.

Vance said the players' willingness to make sacrifices was necessary as Guernsey continue to push for a third-consecutive promotion.

"Their commitment is second to none," he said.

"It's incredible and we're lucky we've got a group of lads who make our job easier. We're in a tough league and we need to have our best players available."

Guernsey take on league leaders Peacehaven, who are 10 points clear at the top of the table, on Saturday.

"We're not going to catch them, but if we hadn't had a few blips, generally down the fact that we couldn't get everyone out at the right time, then I genuinely believe it's a league we could have won," Vance added.

"But we have to have our best 16 or 17 players available all the time.

"This game will show where we're at. It's a game we can win and we just want to keep that momentum going."