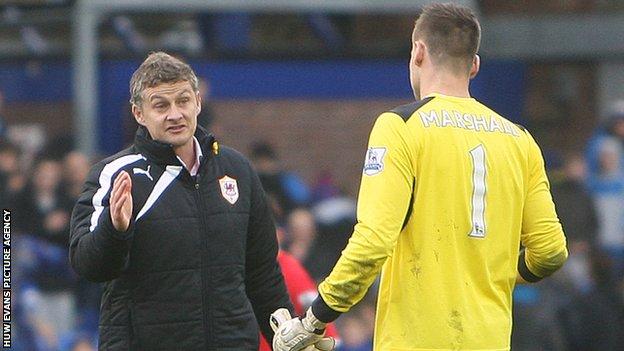 Ole Gunnar Solskjaer says most football fans expect Cardiff City to get nothing from Saturday's game against Liverpool.

Cardiff are 19th in the Premier League table, three points from safety.

Solskjaer's side host title-chasing Liverpool on Saturday and the Cardiff boss accepts many will be predicting an away win.

"If we can get something from this game, you would look at it as a point more than maybe people expected," he said.

"What a terrific opportunity to get something from a game that 99.9% of the world don't think we are going to get anything from."

Cardiff's precarious position at the bottom of the Premier League contrasts to Liverpool, currently second and four points behind leaders Chelsea

"We have got different agendas. We need to get out of the bottom three, they [Liverpool] think they can win the league, no doubt about that," Solskjaer said.

"For us, our agenda is to get the points we need.

"In a game like Liverpool we have got nothing to lose. We are at home. We have done it against [Manchester] City, we have drawn with [Manchester] United.

You have got to make it a competitive game. The footballers they have they can outplay any team

"I am not sure if they expected to be in this position to be able to win the league with eight or so games to go.

"You have got to make it a competitive game. The footballers they have they can outplay any team.

"You have got to get all the little details right in a game, like this one, and have a bit of luck."

Solskjaer says his players can take heart from their performance against Liverpool's Merseyside rivals Everton last weekend even though they lost 2-1 at Goodison Park.

Seamus Coleman's injury time winner denied Cardiff, but Solskjaer says the performance will have given his side encouragement with eight games remaining.

"The performance [at Everton] was a boost," Solskjaer said.

"Of course, the lads were disappointed.

"Their heads were down when I went into the dressing room, but you don't allow them to be down after that kind of performance."