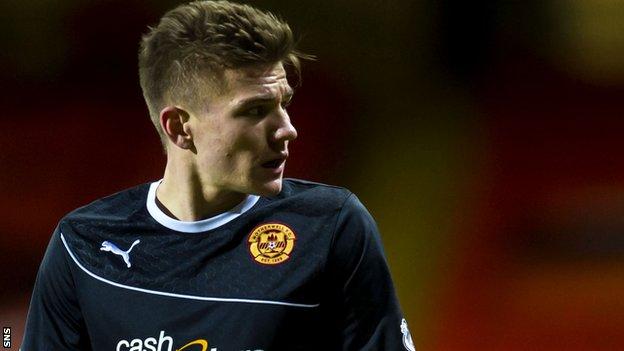 But he does not think the out-of-contract 23-year-old is Rangers-bound.

"It's news to Shaun and it's news to myself," McCall said of reported interest from the League One winners.

"As far as I believe, Shaun has not been in touch with Rangers. I know his agent well and he's a good lad. I think that leaving is the route they are going to look at for the moment."

It's down to us to put an offer to Shaun. He hasn't knocked anything back yet because he's not been offered anything

Motherwell lost midfielder Nicky Law to Rangers last summer despite the Ibrox club being two leagues below McCall's side.

And reports suggest that Rangers manager Ally McCoist has now targeted Newcastle-born Hutchinson, who came through the youth ranks at Fir Park and is out of contract in the summer.

"I have discussed players with Coisty over the last two years, but Hutchy's name has never come up," insisted McCall.

"There's one lad playing for him at this minute in time that I had a chat with him about last summer, so I'm sure he would call this time, even if it was just to get a feel for a player's background."

McCall said that, although it is "well-documented" that McCoist was seeking a central defender, he thought there would be be other players more of interest to the Ibrox club.

"I have a meeting with our chief executive, Leanne Dempster, next week, when we will discuss budgets and what we can offer for next season," said the Motherwell boss.

"It's down to us to put an offer to Shaun. He hasn't knocked anything back yet because he's not been offered anything."

While McCall thought it "highly unlikely" that Hutchinson would stay, he has reminded the defender of the problems faced by fellow Englishman Tom Hateley last summer.

The versatile Hateley rejected a new deal at Fir Park in hope of winning a contract in his homeland but then did not find a club until September.

Even then, his spell at League One outfit Tranmere Rovers only lasted four months before he exited for Polish club Slask Wroclaw.

"I've said to him that he doesn't want to find himself in the situation that a few of the lads did last season not knowing where they are going to go," said McCall.

"I'm not saying anything about going to play in Poland, but I'm sure Tom Hateley would prefer to be playing his football in Britain.

"Knowing the big, daft Geordie Mr Hutchinson as I do, I don't see him fitting in over there.

"His agent might have some clubs down in England willing to take a look at him, but it's different to having a contract sitting there waiting."