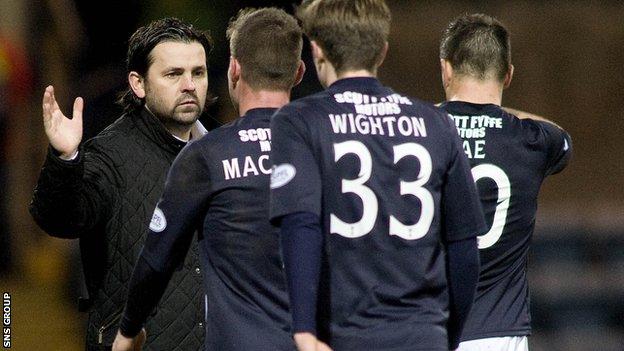 Dundee's American investors have reiterated their long-term commitment to the club.

Paul Hartley's side lead the Championship by one point from Hamilton and two sets of budgets are being drawn up for next season.

Keyes Capital say that failing to gain promotion to the Premiership will not derail their project.

The plans for the club who dropped from the top flight last term include establishing a new youth academy.

We remain excited about the future

With such a narrow lead in the Championship, the Dens Park club is having to balance its current resources and spending plans against two potential outcomes.

Investment in the team under the previous manager John Brown will not be rewarded if Hartley cannot lead the team up, although he has steadied the team's form since he replaced Brown last month.

Keyes Capital invested a six-figure sum in the club along with directors Bill Colvin and Steve Martin in return for control last August, and the Texan-based firm is intent on seeing the project through.

John Nelms, the American who is now Dundee's director of football operations, will soon move his family to Scotland as the club continues its push for promotion.

"I am currently very happy with our progress at the club and feel that we are either at or ahead of schedule in phase one of our long term plans for Dundee," said Tim Keyes, chief executive of Keyes Capital.

"Promotion is the focus at this point. The new manager is doing quite well. The fans have been great.

"John Nelms has just finalized his residential visas for his entire family to make sure that our plans are implemented. We have a fully-funded business plan and cash flow for the Championship season and we are currently finalizing our budgets and cash flow for the next season, which will vary based on what league we are in.

"We see this as a long-term investment and we are just at the beginning of our plans for the club. We remain excited about the future."

Having twice seen the club suffer administration, Dundee supporters were initially anxious about giving up fan ownership in return for investment.

Even if the promotion challenge remains precarious, with Hamilton close behind and Falkirk only six points further back, Keyes rejected any notion that there financial difficulties could become a problem.

"There are no anxieties and any business matters are taken care of without fanfare," Keyes said. "We are currently working on budgets as we speak. We remain on course to develop a top-flight youth academy and have a team the fans can be proud of."