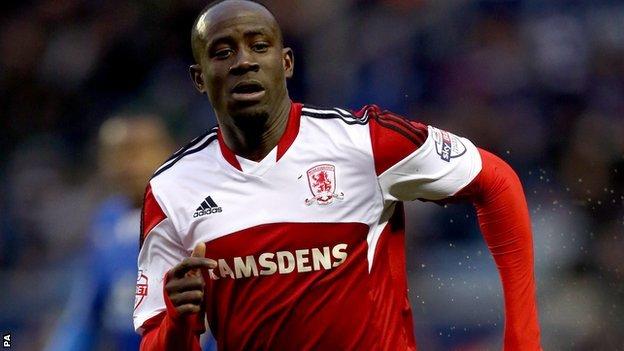 Albert Adomah opened the scoring for Boro after 65 minutes, steering the ball home from inside the six-yard box.

Leonardo Ulloa missed the chance to equalise 12 minutes later, blazing over from the penalty spot after George Friend brought down Solly March.

And Danny Graham wrapped up the points late on with a low strike from 12 yards following a pass by Grant Leadbitter.

While victory was Boro's first away from home since January 11 at Blackpool, Brighton have slipped four points adrift of Reading in the final play-off spot.

The hosts should have opened the scoring early on, but midfielder David Lopez fired wastefully wide following a Will Buckley cross.

Tomasz Kuszczak was kept busy at the other end, though, making saves from Luke Williams, Lee Tomlin and Leadbitter.

And the pressure told in the second half as Seagulls skipper Gordon Greer allowed Graham to cross, with Adomah applying the finish.

Ulloa had the best chance to restore parity but was wasteful from the spot, allowing Graham to clinch the victory four minutes from time.

Brighton boss Oscar Garcia on fans booing at half-time: "I didn't hear it. I am first to the dressing room. It's normal. If they are not happy, they can do this.

"I can only say good things about the fans. They are clever fans; we have a mid-table budget and we are fighting for a high position.

"We're making mistakes at the back and we are being punished. The problem is we are not punishing the opposition ourselves and now these are the kind of things that are making the difference."

Middlesbrough manager Aitor Karanka: "It's my first season in English football and I'm very happy because everything is new to me.

"The potential is such that we have to work together to do the best. We have a good attitude and will be working to improve the squad in time.

"We created some good chances in the first half and didn't let Brighton play. We are playing in a very high tempo and deserved a slice of luck when Brighton missed their penalty."