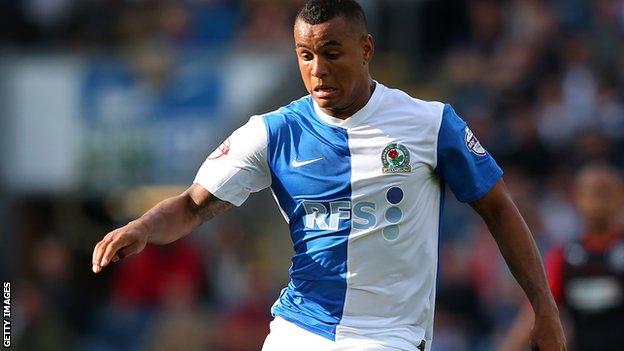 Millwall climbed off the bottom of the Championship but were denied victory by a late goal from 10-man Blackburn.

Shaun Williams gave the Lions the lead with a penalty after Grant Hanley was sent off for a foul on Steve Morison.

Michael Keane levelled with his first Rovers goal, but then conceded a spot-kick by pulling down Simeon Jackson, who converted to put Millwall back on course for a first win in five games.

Millwall had not won at home since January, but started well and Scott McDonald forced Paul Robinson into an early save.

After David Forde saved from Luke Varney at the other end, the Lions struck a post through Owen Garvan's free-kick.

McDonald went close again eight minutes before the break when his low drive was beaten away by Robinson.

Blackburn started the second half brightly, but 12 minutes in were down to 10 men and 1-0 behind.

Hanley was dismissed after bringing down Morison, with Williams converting the resulting penalty.

Millwall looked to press home their advantage but, with the worst defensive record in the division, they could not keep Blackburn at bay, and on-loan Manchester United man Keane headed home Craig Conway's corner just eight minutes later.

Blackburn continued to push with Keane denied a second by Forde's full-length save, but the defender then pulled down Jackson to concede a second penalty with just three minutes of normal time remaining.

Substitute Jackson fired home to put Millwall on the brink of a much-needed victory, but two minutes into stoppage time King scrambled home a Conway cross to dash the Lions' hopes of maximum points.

Millwall manager Ian Holloway: "We feel like we've lost in there but we've only dropped two points. We've got to win five out of seven now but we should have won this one. I'm fuming because we've dropped two points but we did get one.

"We live to fight another day. How am I going to feel when I drive home tonight? I'll be devastated when I see that on television but when I say devastated, it's because it's easily solvable.

"We are where we are for these reasons and we need people now to step up to the plate."

"Our lad says he got a touch on the ball first and then takes him down for the second penalty, but hey if he gives the first he's going to give the second isn't he? If that's a penalty you're going to have 10-15 penalties a game.

"It was outstanding character and belief (to equalise). Their desire, belief and mentality was outstanding but unfortunately it wasn't enough because of the referee's decision."