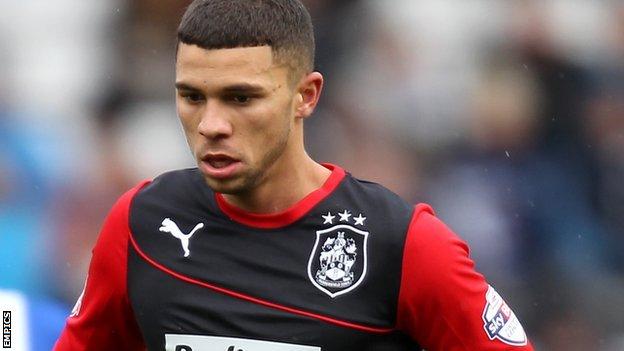 Championship play-off hopefuls Reading saw their poor home form continue as they were held by Huddersfield.

Town took the lead after four minutes when Nahki Wells ran on to a long ball from Tommy Smith and fired home.

Reading were soon level when Pavel Pogrebnyak scored from the spot after Oliver Norwood tugged Jobi McAnuff's shirt inside the box.

Huddersfield had the best chances to win it, and went closest when Wells hit the post from an acute angle.

The Royals have now failed to win any of their last six home games but remain in sixth place because Nottingham Forest and Ipswich, the two teams closest to the play-off places, fought out a draw.

Another goal for Wells

Nahki Wells's goal was his fifth for Huddersfield and 19th of the season, having scored 14 for Bradford before his move from the League One club in January

Huddersfield, who are safely in mid-table, came into the game on a run of only one win from their last 10 away matches but made the perfect start.

Smith's pass evaded Sean Morrison and Wells was left to run in on goal and beat Alex McCarthy with a low shot.

The Terriers' lead lasted just a few minutes, however, before referee Keith Stroud spotted Norwood's tug on McAnuff's shirt and pointed to the spot.

Pogrebnyak stepped up to send Huddersfield keeper Alex Smithies the wrong way, and score his 11th goal of the season.

Reading also went close before half-time when Pogrebnyak saw his header pushed away, and Smithies was called into action again to deal with Michael Hector's well-struck shot.

It was the visitors who had the upper hand after the break but they failed to take their chances.

When McCarthy was beaten, Jordan Obita had to clear off the line from a Murray Wallace header, but the home side held on for a point.

Reading manager Nigel Adkins: "We're still sixth and we're still in the play-offs. We picked up a point and we've just got to keep grinding away. We're at Charlton next and we've been free-scoring away from home.

"We went behind early on and that gave us a real challenge but we got ourselves back into it quickly, which was pleasing. It was a good point on the board and there's a good spirit among the players."

Huddersfield manager Mark Robins: "We controlled the first period really well and we were camped in their half at times. We passed the ball nicely and created quite a few chances and had one effort cleared off the line.

"I'm harsh on the players sometimes but they are trying to do the best they can and they did that today. I'm pleased with the way it's going."