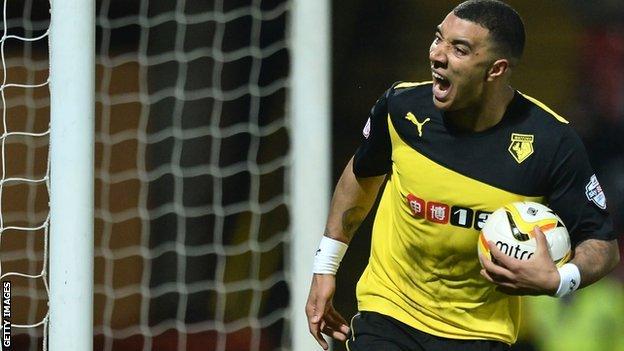 Troy Deeney scored twice for Watford as his side recorded their first away victory since October against Sheffield Wednesday in the Championship.

Gabriele Angella opened the scoring for the away side after just five minutes, tapping home from close range.

Lewis McGugan extended the lead with a header before Deeney struck twice in the space of two second-half minutes.

On-loan striker Benik Afobe headed a consolation goal for the hosts, who had won their previous four home games.

The result meant Watford won 4-1 at Hillsborough for the second successive season.

The Owls were without head coach Stuart Gray, who was attending his son's wedding.

But counterpart Giuseppe Sannino was able to inspire his side to their first win in three league games and first away win in 15 attempts.

The Hornets went ahead early on as McGugan headed down a free-kick that was initially saved by goalkeeper Chris Kirkland, before defender Angella slotted home the loose ball for his seventh goal of the season.

The game was over soon after the interval as frontman Deeney netted his first by calmly slotting the ball past Kirkland, before tapping home a minute later after Mathias Ranegie's shot came back off the post.

Owls youngster Afobe, on loan from Arsenal, powered a header past Manuel Almunia from Liam Palmer's cross just three minutes later and American defender Oguchi Onyewu hit the crossbar with another header late on, but the visitors' lead was never threatened.

Sheffield Wednesday coach John Deehan: "We've just had a chat in the dressing room between all of us and we've had some very strong opinions.

"The performance fell below the level we've been performing at before."

Watford manager Giuseppe Sannino: "It's a long time since Watford have won away; too many losses and too many draws. I'm very happy for our fans and our players.

"The confidence grew during the game because we were able to pass the ball and move the ball better than in the past."