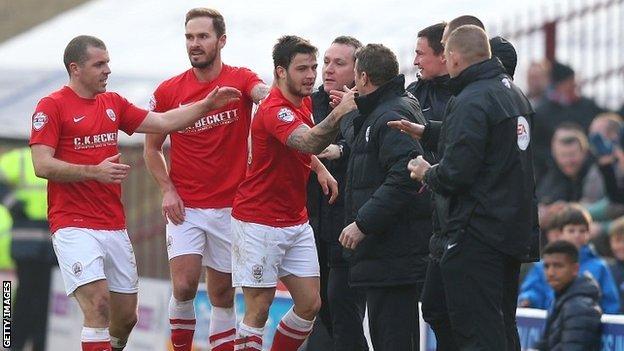 Chris O'Grady lobbed Marek Stech before Liam Lawrence fired in from long range to give the Tykes a two-goal lead.

Yeovil's Luke Ayling rifled Jamie McAllister's cross into the net to give their fans hope with 20 minutes left.

But another O'Grady goal and a Dale Jennings strike saw the Tykes leapfrog their hosts and secure back-to-back wins for the first time this season.

Both sides remain in the bottom three but Danny Wilson's Barnsley side drew level on points with fourth-bottom Charlton, beaten 3-0 by Derby.

Looking to build on Tuesday's impressive 3-1 win at Reading, the visitors were quicker to settle and threatened the Yeovil goal for the first time when O'Grady's effort was blocked.

The hosts, who had lost only one of their last six matches, woke up when Joe Ralls's teasing free-kick narrowly eluded Shane Duffy, but it was Wilson's men who dictated proceedings during a poor opening period.

The introduction of Reuben Noble-Lazarus in place of the injured Marcus Pedersen gave the visitors more potency in the final third but it took until after the interval to make the breakthrough.

Eight minutes into the second half, O'Grady pounced on a weak defensive header by Byron Webster to coolly lob the ball over the on-rushing Stech.

The Somerset side's day took a turn for the worse shortly after the hour when former Sunderland midfielder Lawrence weaved his way past a couple of tackles before lashing an unstoppable effort into the bottom corner of the net.

On 13 league goals, Barnsley's Chris O'Grady is the highest scoring player from sides in the bottom half of the Championship

Yeovil responded through defender Ayling to make it 2-1 but the hosts paid the price for a drab display when O'Grady took the ball around Stech to add his second, before Jennings prompted a mass exodus by rattling home Barnsley's fourth.

Barnsley assistant manager Chris Hutchings: "It was an even first half but the boys are playing with confidence and they have to take that into the remaining games.

"All we can do is take care of our own results and make sure we go into every game with the same positive attitude and come out with three points.

"I think you've seen today and on Tuesday that we're up for this battle."

Yeovil manager Gary Johnson: "It was a poor performance. Barnsley turned up and looked stronger, quicker and cleverer in every department.

"Their first goal was a poor one and our boys didn't seem to put any part of Yeovil's game together. It was like a group of lads off the street that we put together, threw them out there and asked them to play.

"It's very disappointing and it's probably our worst all-round performance. Every game you lose it looks more difficult, but until it's mathematically not possible we'll keep going, but if we play like that then we'll be bottom by a million miles."