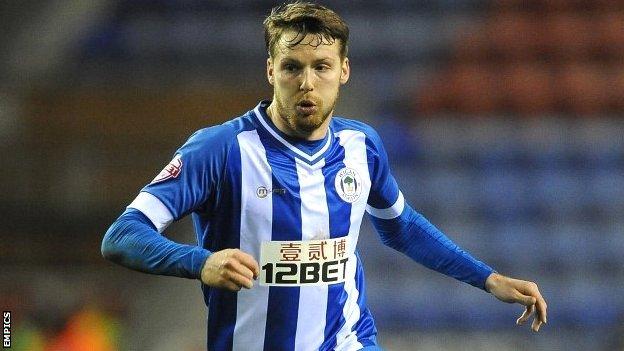 The hosts looked to be heading for victory after on-loan forward Lukas Jutkiewicz scored in the first half from Robert Hall's free-kick.

Wigan on course for season finale

With Reading also drawing, Uwe Rosler's Wigan side missed out on a chance to move clear of their play-off rivals.

But they are still five points clear of seventh-placed Nottingham Forest, with a game in hand.

Bolton, who are 10 points clear of the relegation zone, began the game at a flying pace with Hall at the heart of most of their endeavour.

It was not all one-way traffic, though, and the Latics could have scored through both Emmerson Boyce and Marc-Antoine Fortune had it not been for heroic blocks from David Wheater and Jay Spearing.

A magnificent assist from Hall then saw Bolton take the lead. The former West Ham winger's free-kick was curled perfectly into the danger area and just needed the slightest touch from Jutkiewicz to beat Ali Al-Habsi.

They then almost doubled their advantage before half-time, with Liam Trotter off target.

Wigan were then fortunate to keep 11 players on the pitch. Trotter broke clear before last man Leon Barnett brought him down on the edge of the penalty area. Referee Darren Drysdale, though, only chose to award the defender a booking.

Al-Habsi kept his side in the game with a string of saves before Powell smashed in a late equaliser from Martyn Waghorn's cutback.

Had Gomez converted from the spot following Baptiste's foul, it would have been harsh on Bolton.

Bolton manager Dougie Freedman on referee Darren Drysdale's decision to only book Leon Barnett for a foul on Liam Trotter:

"I don't like criticising referees and I thought he had a good match today but I was very, very disappointed by the decision he made.

"It was a decision which gave them that little bit of hope to get back in the game in the end.

"It's a difficult match for referees and I'm not one to criticise them because I know how difficult their job is, but I just can't get my head around the decision.

"He's through on goal and it's just a very poor decision. On the replay it's even worse."

"It was very important to get something out of today's game.

"We had some experienced players out there who couldn't handle the derby situation and got nervous after they scored.

"Today we are disappointed in ourselves. We should have played a lot better from the start. As a ball-playing team we should have been better on the ball and at times we didn't cope with the physical side of things."