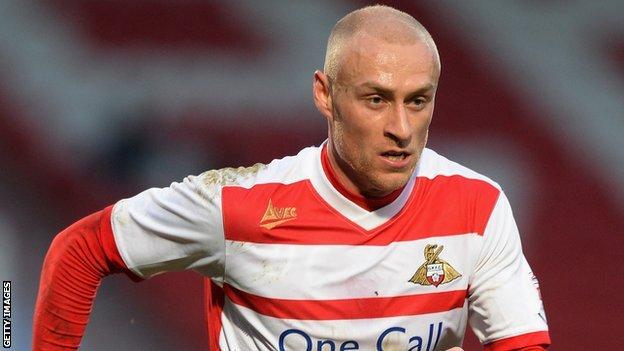 Leeds lost for the fifth time in six matches as Doncaster took a step closer to safety with victory at Elland Road.

After agreeing to defer half of their wages for March to ease the burden on the cash-strapped club, Leeds' players did not go down without a fight.

But first-half goals from David Cotterill and Billy Sharp were enough to give the visitors only their second away victory of the season.

Ross McCormack's 28th goal of the season was not enough for Leeds.

The Whites are losing more than £1m a month, and Massimo Cellino's bid to buy a majority stake in the club was blocked by the Football League.

The Italian businessman intends to appeal against that decision, and Leeds fans staged a minor demonstration against current owners Gulf Finance House 20 minutes into the game, chanting "turn your backs on GFH" as they faced away from the pitch.

Three minutes later the hosts were behind when Cotterill's corner was headed out by Sam Byram as far as Richie Wellens, who returned the ball for Cotterill to fire an angled shot past Jack Butland from 15 yards.

Leeds responded after the break and thought they should have had a penalty when Doncaster defender James Husband appeared to handle.

But they did find a way through just after the hour as McCormack met a Matt Smith flick-on to head his fourth goal in as many games.

James Coppinger missed a chance to make the game safe for Doncaster, who then had to withstand late pressure to secure their first win over their Yorkshire rivals in eight attempts.

On-loan goalkeeper Sam Johnstone was booked for bringing down McCormack just outside the box, and then saved from Stewart.

And as Leeds pressed for a later leveller, Smith's injury-time header grazed the bar.

"The big picture is that Massimo Cellino has his appeal heard on Monday which is a very important day for this club. Forget about me. It is all about what is right for Leeds United going forward.

"We need this ownership issue sorted out as of yesterday because it has been a very difficult few months. I am not looking for excuses.

"I spoke to the players on Friday about the wages situation and it wasn't an easy day but an agreement was reached.

"We were in the top six around Christmas and what has happened since is frightening. Our first-half performance was embarrassing. It was just horrible to watch.

"I was delighted. In the first half we were fantastic. You have to give Leeds a lot of credit because they put us under real pressure in the second half.

"This result gets us closer to safety, we have seven games left and our recent form is good. It was a rare away win and we are dedicating it to the fans who have supported us all over the country. All credit to the players for the pride they showed in their performance.

"We were disappointed with the goal they scored because we switched off and you can't do that with Ross McCormack in their team.

"You can't give yourselves a points target for survival in this league but we have given ourselves a chance."