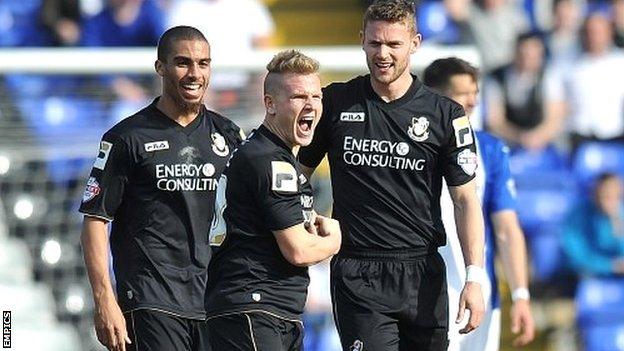 Bournemouth boosted their outside hopes of reaching the Championship play-offs as Birmingham failed at home again.

The Cherries, who have won six of their last seven games, stormed into a 3-0 lead through Matt Ritchie and a Lewis Grabban double, his second a penalty.

Ian Harte curled in a fourth for Bournemouth before Birmingham rallied.

On-loan Manchester United striker Federico Macheda was twice on target for City after half-time, but it is now 15 winless home games for Birmingham.

Bournemouth's fine run of form has propelled them to within five points of sixth-placed Reading.

Three goals in a 13-minute first-half spell helped the Cherries to maintain an unbeaten record at Birmingham in seven visits.

The home side had no answer to Bournemouth's attacking intent as they created an impressive opening goal which was initiated by Ian Harte.

His low cross from the left was collected by Grabban who picked out Ritchie on the right and the striker made no mistake with a well-struck cross-shot past keeper Darren Randolph.

Grabban was on hand to tap home a simple second at the far post after Marc Pugh's cross was deflected into his path.

Randolph's afternoon got worse when he unnecessarily brought down Grabban, who scored from the penalty spot for his 19th goal of the season.

Harte compounded Birmingham's embarrassment with a 52nd-minute strike from distance which arced into Randolph's net.

To their credit, Birmingham fought back and Macheda grabbed Birmingham's first when he scored with a low left-footed shot following a headed pass from Jordon Ibe.

Macheda notched his second with a 20-yard volley but Bournemouth were deserved victors.

Birmingham manager Lee Clark: "We scored twice at home and do not get a point. This tells me where we have to improve massively.

"The goals sent us tumbling and knocked us for six. We knew they would be a threat down the wings and it was so disappointing."

Bournemouth boss Eddie Howe on his side's play-off hopes: "It is going to be difficult. If you look at the clubs above us, their destiny is in their hands not ours.

"They are the team with experience but if we carry on the way we are playing and showing a fearless attitude, then who knows what we are capable of achieving."