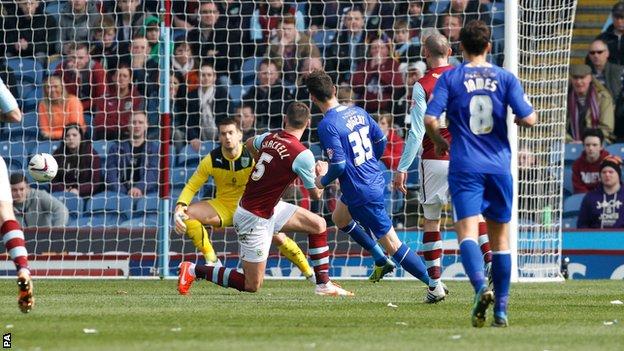 Championship leaders Leicester City took a huge stride towards promotion back to the Premier League with victory over second-placed Burnley.

David Nugent opened the scoring for the visitors with a lovely curling effort into the bottom corner of the net.

Anthony Knockaert hit the bar with a rasping drive as Leicester looked for a second, before Burnley's Scott Arfield shot straight at Kasper Schmeichel.

Victory extended Leicester's unbeaten run in the league to 19 games, taking them six points ahead of their opponents with a game in hand and 15 points clear of third-placed Queens Park Rangers.

Burnley, beaten at Turf Moor for the first time this season in the league, looked toothless in attack, with top scorer Danny Ings missing with an ankle problem.

They suffered a further blow in a cagey opening as Sam Vokes hobbled off with a knee injury, leaving manager Sean Dyche without a strike pair who have netted 46 goals between them this season.

The Foxes took the initiative, and went in front on 35 minutes. Wood, on as a substitute for Jamie Vardy, fed Nugent, who collected the ball outside the box before turning onto his left foot and bending a beautiful finish past goalkeeper Tom Heaton.

Leicester were inches away from doubling their advantage after the interval, but Knockaert rattled the bar with a drive from outside the area. Seconds later, Arfield's effort was kept out by a strong hand from Schmeichel as the hosts went in search of an equaliser.

As Nigel Pearson's league leaders pressed for a second, Jeffrey Schlupp's goalbound shot was blocked close to the line by Jason Shackell.

Michael Kightly then stretched Schmeichel with a long-range drive, but Wood clinched the victory, smashing home from 25 yards as Leicester moved closer to securing top-flight football for the first time since 2003-04.

Burnley boss Sean Dyche: "I thought a couple of decisions didn't go for us but overall they deserved the win.

"They're a very good side. At full strength I would have liked to have gone toe-to-toe without the challenges we had to our team today. But overall they're there at the top of the table for a reason."

Leicester manager Nigel Pearson: "Coming into the game we were probably the two most consistent sides over the entirety of the season and we're very pleased to get the win.

"I'm delighted with the performance in the sense that knowing how tough it's going to be at this stage of the season where the pressure's very much on results rather than performance - I was pleased with our ability to deal with the big occasion against a very good side."