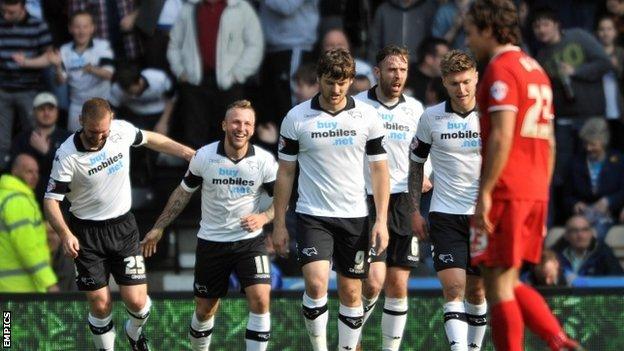 Derby strengthened their grip on a play-off place with a convincing win over Championship strugglers Charlton.

Patrick Bamford set up Johnny Russell to score the Rams' first goal and then pounced on a poor back-header by Johnny Jackson to squeeze home their second.

But it was the home side who sealed victory six minutes from time when Chris Martin met a Craig Bryson corner with a glancing header past Ben Hamer.

Derby's win keeps them in fourth place in the table, and closes the gap to second-placed Burnley to 10 points.

It also means Steve McClaren's side have an 11-point lead over Nottingham Forest and Ipswich, the two teams closest to the play-off places, with six games remaining.

Charlton, who are only out of the relegation zone on goal difference, created the first clear chance when Reza Ghoochannejhad let fly from the edge of the area, but Grant pushed it behind to make his first significant stop of the day.

Derby scored with their first meaningful attack, which saw Jeff Hendrick play the ball in from the right before Bamford found Russell to turn and fire home a low shot.

Bamford made it 2-0 before half-time after Jackson's error and only an excellent Hamer save stopped Andre Wisdom adding a third.

Grant made further stops to deny Callum Harriott and Joe Piggott after the break but Derby's top scorer Martin made sure of victory with his 19th goal of the season.

"I was pleased that the front three scored and we've got back to scoring goals, that's nine in a week and we've had two clean sheets as well.

"There's a good balance to the team which has shown its mettle and quality and shown it's ready for the run-in.

"We've got to keep this momentum going now and keep doing what we are doing."

"We were not in the game at all in the first half and we had many difficulties.

"We were not able to play as we can and also we made some defensive mistakes but in the second half we created chances but we must be more efficient at good moments in the game.

"But the main thing is still to believe because I believe for sure that we can avoid relegation. It will not be an easy story but the players have to believe in it as well because we have put something in place.

"The important thing now is that we have a good recovery before we play Leeds on Tuesday. But I do believe and I want to be able, with the players, to write the last chapter in the way that we hope it will be."