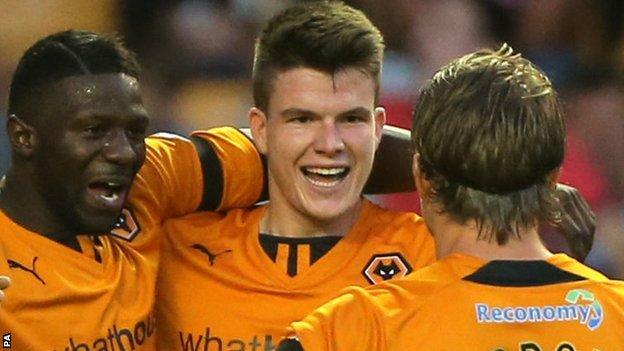 Wolves moved six points clear at the top of League One after substitute Liam McAlinden's first league goal for the club gave them victory at MK Dons.

Striker McAlinden headed in Kevin McDonald's cross a minute after Dons substitute Sanmi Odelusi was sent off for two bookings in two minutes.

Defeat for the hosts left them three points off the play-off places.

Cannock-born McAlinden, who has come through the Wolves academy, made his first-team debut at Molineux in a 2-1 home defeat by Burnley in April 2013.

He joined Shrewsbury on loan in October last year and scored three times in nine appearances.

It was the Dons' fourth successive home defeat but Wolves, who were backed by more than 8,800 fans as a new record attendance was set at Stadium MK, now have daylight between themselves and the chasing pack.

They are now six points ahead of second-placed Brentford, who were held 0-0 at Oldham, and 10 clear of Leyton Orient in third after they lost 1-0 at home to Bradford.

Wolves had marginally the better openings of a cagey first half as Jacobs shot tamely at home keeper David Martin, who also tipped over a Dicko effort.

Dicko went close again at the start of the second half, while at the other end striker Bowditch saw his free-kick pushed around the post by Wolves keeper Carl Ikeme.

But the game swung in the visitors' favour when Odelusi, a 58th-minute substitute, was shown two yellow cards in quick succession for fouls on Scott Golbourne.

And McAlinden, whose only previous senior Wolves goal came in a Johnstone's Paint Trophy tie against Walsall last August, made his side's numerical advantage count immediately when he nodded in to win it.

"I thought the players' hunger, their fight, determination and bravery, in and out of possession, was tremendous.

"These young players are getting tremendous experience; the future is certainly bright at MK Dons.

"You've got to accept we've been beaten here by the best team in the league. I think it was a very fair and equal game today.

"I think the players, young and old, gave everything they've got in their bodies and I don't think they could have done much more."

"It was a terrific win here on a pitch that made it very difficult for both teams, we just had to find a way of winning.

"I just think you need a variation in tactics, you can't just play one way. Our midfield players have scored goals this season so it's worked for us.

"Look forward positively is the important thing for us now. We're hoping that Bakary Sako and perhaps Matt Doherty will come back."