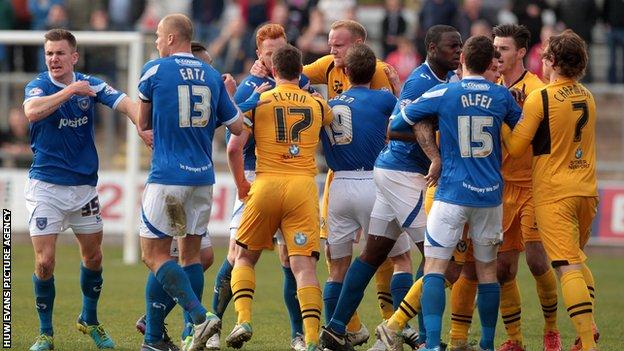 Portsmouth claimed a crucial win in their relegation struggle at a Newport County side who had two men sent off.

Newport went behind when Kevin Feely fouled Ryan Taylor in the area and the striker converted the penalty himself.

Adam Chapman was then shown a straight red card for a two-footed lunge, while Darcy Blake was also sent off late on after the defender's second booking.

Jed Wallace's header doubled Pompey's lead although Ismail Yakubu did pull a goal back for County from a corner.

"I'm proud of the players; even down to nine men we took the game to Portsmouth and I thought we might have deserved to get something out of it.

"The two yellow cards for Darcy Blake, that just happens in a game and we're disappointed with Adam Chapman, it's so out of character and it's cost us dearly

"If you take the penalty and the sending-off out of the game - which was a mistake really - in the context of the game we were very good, I thought we controlled it and played a large majority of the game in Portsmouth's half."

"I actually enjoyed it. I think the lads' attitude, their spirit, their togetherness was fantastic and that was just what was needed.

"The result was all that mattered today. How we got there didn't matter but we got a performance as well today.

"We got a spirit, we got a reaction and we got the three points.

"If I've got a criticism of us today it was probably that we didn't keep the ball well enough when they went down to nine men.

"The confidence hasn't been great for obvious reasons and hopefully now that will improve."