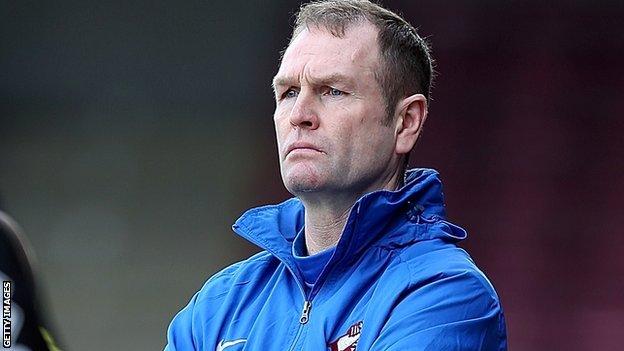 Wilcox's record surpasses that set by Preston's William Suddell in 1889.

Max Kretzschmar should have put Wycombe ahead when he shot over from six yards.

Gary McSheffrey then struck wide for Scunthorpe and his cross hit the bar after the break before he limped off with a hamstring injury after the Iron had used all their substitutes.

In a game of few clear chances Scunthorpe were left frustrated by a resilient Wycombe side, who are battling to avoid relegation from League Two.

Steve Craig went close for the visitors with a header before Matt Ingram's double save denied Dave Syers from close range at the other end.

McSheffrey then went close for Scunthorpe from the edge of the area, after Kretzschmar's wayward attempt, and Eddie Nolan headed over for the hosts after half-time.

But, having made three changes, the Iron were forced into playing with 10 men when McSheffrey went off with 17 minutes remaining.

"The fans should be really proud. Forget about the football side, let's speak about these players as people.

"I've got an amazing group in there and we're six games away from achieving what we set out to achieve.

"And I really do hope we do it, for the players mainly. This group is the best group I have ever worked with."

"It was a deserved point, and that could well come in to our survival.

"All I can say is thank you to everyone who has stuck by me, because there's many a manager that has been changed in League Two.

"They're my squad and I can do it with this squad. It's brilliant to have them all fighting like that today and like I said I'm really pleased.

"We could have nicked three which would have been handy, but we'll have to get them next week against Dagenham."