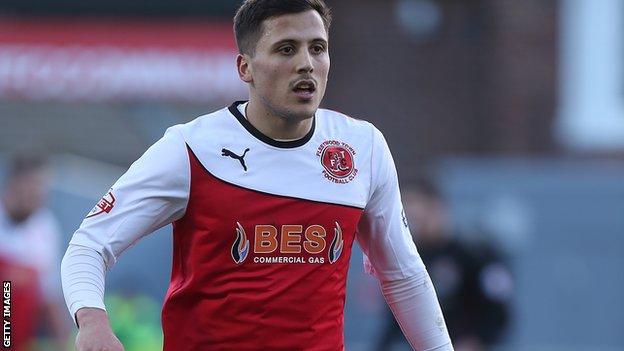 Fleetwood missed the chance to close the gap on the League Two automatic promotion places after they were held by leaders Rochdale.

The best chance of a tight first half fell to the hosts but top scorer Antoni Sarcevic fired over when well placed.

Iain Hume and Matty Blair saw efforts saved as Fleetwood chased a winner but the visitors held on.

The stalemate leaves Rochdale two points clear at the top of the table after Scunthorpe were held by Wycombe while Fleetwood remain fourth, five points behind Chesterfield who occupy the final automatic promotion spot.

The hosts started the game positively in the knowledge that a win would put them to within three points of the automatic promotion places.

The lively Sarcevic dragged an effort wide before he latched onto a David Ball cut-back only to blaze over when he should have scored.

With the two teams so evenly matched a moment of brilliance seemed to be required to split them and George Donnelly nearly provided it.

He latched onto an Ian Henderson knockdown but his overhead kick agonisingly bounced off the outside of the post.

That was the closest either team came as the two promotion-chasing sides were forced to settle for a point apiece.

"It was a game we could have won and I think we should have. We're disappointed but it's a point gained.

"We have to take that sort of performance into the rest of the season. If we do that, we'll put ourselves into a great position."

"I'm really happy with a point and it keeps a nice cushion between ourselves and Fleetwood.

"Our goal difference is an extra point in my opinion.

"So, arguably, Burton or Fleetwood have to win four games, and we have to lost four out of the last six."