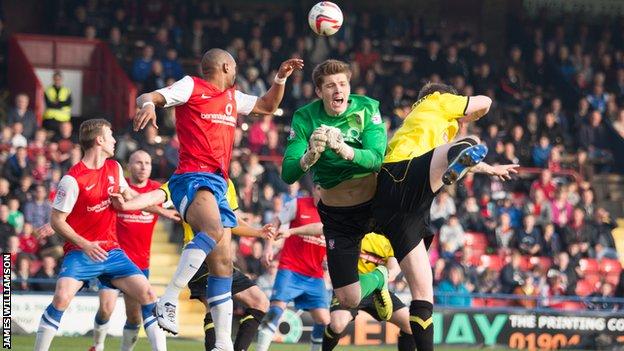 Promotion-chasing pair York and Burton failed to gain ground on the League Two leaders as they drew a blank at Bootham Crescent.

Burton continued to press and had the best chance of the game when Billy Kee's 25-yard strike rattled the bar.

Keith Lowe headed wide late on for the hosts but neither team could find a breakthrough.

The Minstermen extend their unbeaten run to 11 games but drop out of the play-off places following Southend's win over Torquay.

"I'm delighted with the point. I thought it was a very good, honest second division game with neither side willing to give anything.

"A clean sheet again for ourselves is exactly what we're looking for.

"The work rate and work put in by the players was phenomenal and we've got to keep that going over the course of the next six games and see where that gets us."

"If you look at the chances created, I think we've created quite a lot more than they have and I thought we were in control of the game. It's just that extra little bit of finishing we need.

"Matty [Palmer] has got in a couple of times, Callam McFadzean's got in once, Billy [Kee] has hit the bar and made the keeper scramble, Adam [McGurk] has got into some terrific positions and I was really pleased with what we've done in the 90 minutes.

"You always hope you can keep that continuity and I thought Belly {Lee Bell who came in for Robbie Weir] was really good, so overall, I was very pleased. They're a team that's won eight out of the last 10 games and I felt was though we dominated the best part of the game."