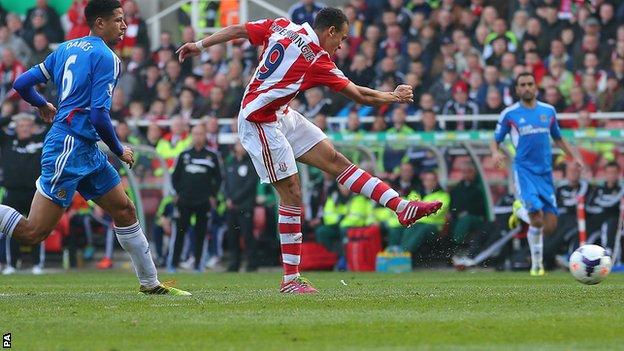 Stoke City remain on course to achieve their best points total in the Premier League after a hard-working victory over Hull at the Britannia Stadium.

Peter Odemwingie's well-taken goal, his third in as many games, was enough to secure the win for Mark Hughes's men.

Hull's Liam Rosenior had the best chance of the first half, but could not find the target with a free header.

Stoke goalkeeper Asmir Begovic pulled off a superb save from David Meyler's deflected shot after the break.

Victory moved the Potters onto 40 points, and they need eight more from their final six matches to ensure their best tally since winning promotion to the Premier League in 2007-08.

They have already beaten Chelsea, Manchester United and Arsenal at home this season, and have lost just once in their past nine league games.

Hull, meanwhile, may be peering nervously towards the relegation zone having taken just three points from the past 15 available, though they still hold a seven-point advantage over 18th-placed Cardiff.

"It is the 10th Premier League victory of the season for Stoke City and takes them to 40 points, which is the traditional safety mark. Although I don't think teams will need 40 points to stay up this season, Stoke are definitely going to."

Steve Bruce's men had the better of the chances in the opening period, and almost opened the scoring through midfielder Tom Huddlestone, who had a low drive from outside the area pushed away by Begovic.

The Tigers, who returned to the top flight in the summer after a three-season absence, soon had a better chance to break the deadlock, but defender Rosenior headed over from close range.

Odemwingie then had two chances to score, but dragged an effort wide before having a shot well gathered by stand-in Hull goalkeeper Steve Harper.

But it was Begovic who pulled off the save of the match at the other end, clawing away Meyler's powerful deflected strike, with striker Nikica Jelavic unable to slot home the follow-up.

With the visitors unable to force an equaliser, Stephen Ireland could have made it a more comfortable margin of victory, but his shot was tipped over by Harper.

"We deserved the results, made the better chances but we didn't have the spark in the first half. That was a credit to Hull because they came and defended well. When we got the goal lead, we were quite comfortable. We have won four in five which is good at Premier League level.

"We have needed the threat in behind and Peter Odemwingie gives us that. He ran through the middle and capitalised on the errant pass. He has hit the ground running and done well for us.

"Our intention was to get into the top half and we are in a good position now. We are going to try and go for it."

"We have made bad mistakes and when you make mistakes like that at this level, we gifted them the victory. That changes things dramatically and it was a frustrating day.

"For Peter Odemwingie to get into that position and score is ludicrous. Stoke didn't do well enough to beat us, we have given it to them."

"10 wins will be sufficient and the quicker you get it done, the better. We need to get the accumulation of points."