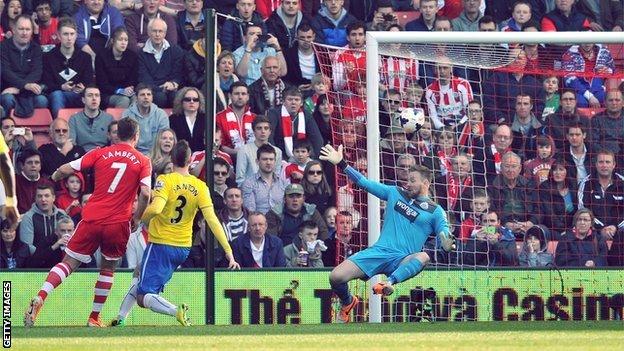 Jay Rodriguez now has 15 league goals this season. The only English striker with more is Liverpool's Daniel Sturridge who has 20.

Lambert finished powerfully after the restart and Lallana scored with a stunning a 25-yard drive at St Mary's.

Rodriguez completed the rout with his 15th league goal of the season.

The 24-year-old is now the joint second-highest English scorer in the top flight, behind Liverpool's Daniel Sturridge, who has 20 goals.

After making his England debut in the 2-0 defeat by Chile in November, Rodriguez has consistently found the net and must now harbour hopes of a place on the plane to Brazil, a privilege which will surely be awarded to Lallana on this showing.

The playmaker found space behind Newcastle's midfield all afternoon and his thunderous strike with a quarter of the game remaining showcased power to complement the guile he so frequently provided.

Mauricio Pochettino's side have lost more points from winning positions than any other Premier League side this season. But, buoyed by the England trio, they never looked in danger of relinquishing their lead as they cruised past Newcastle to move eighth in the table.

The presence of manager Alan Pardew in the stands after his three-game stadium ban was not enough to inspire the Magpies, who have now lost eight of their 13 matches in 2014.

Pardew remains banned from the touchline for three more games, but Newcastle's haul of just 38 goals this season - the lowest-scoring club in the top half of the table - means the return to training of top scorer Loic Remy next week may be deemed more crucial.

It took until the 72nd minute for lone striker Papiss Cisse to muster an effort on goal for Pardew's side as referee Andre Marriner - deployed for the first time since his mistaken identity blunder at Chelsea last week - oversaw a one-sided affair.

In the opening half-hour, Rodriguez sent both a shot and a powerful header into the side netting, before Newcastle's stand-in keeper Robert Elliot foiled his glancing header.

Lallana and Dejan Lovren then headed clear chances wide, but it was Rodriguez, who has had more shots than any of his team-mates this season, at the sharp end of his side's classy build-up play.

Elliot dived to his left to deny his stretching effort from six yards and Lambert, who had unselfishly created the chance, laid the opener on a plate for Rodriguez when clean through on goal.

Lambert's teamwork was swiftly rewarded after the break when Lallana's clever clipped cross allowed him to power in his 10th league goal of the season.

The ease with which Pochettino's side created openings would have been a concern for Pardew, who before kick-off said his return to the stadium would aid a "winning mentality".

All too often though, the home side dissected the visiting midfield and Lallana took full advantage of the space afforded him to fire past the helpless Elliot and seal the win with 20 minutes remaining.

Of Southampton's 49 league goals this season, 34 have been scored by English players

More heroics from Elliot denied James Ward-Prowse either side of Rodriguez heading against the post, but the striker would not be denied his second and made space in the area to drill home late on.

Southampton manager Mauricio Pochettino: "We had an amazing performance and not just the final result but the way that we played was outstanding.

"It is very true that there have been games in the past where we have played very well but the final result has not showed that. That did not happen this time.

"It's clear that for the three English players that we have here at Southampton it is very good to maintain those high standards they have shown over the season.

"It's only going to increase their chances of going to Brazil so it's very good for them."

Newcastle manager Alan Pardew: "The performance was lacklustre from us. The difference in energy levels between the two teams was marked, I thought.

"We've got to threaten the game more than we did today. If you don't threaten the opposition then they're going to keep coming and that's what Southampton did.

"That's a performance that we need to make sure never happens again. It was our lack of energy, wherever you were sitting in the stadium, that looked a problem."

For images from all of today's matches, visit our gallery on the BBC Sport Facebook page.