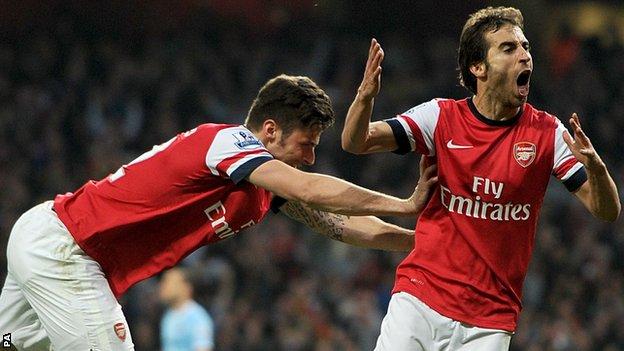 Manchester City missed the chance to move to the top of the Premier League as Arsenal fought back to earn a deserved point at Emirates Stadium.

After Chelsea's 1-0 defeat at Crystal Palace, City knew victory at Arsenal would see them overhaul Jose Mourinho's side on goal difference and still have two games in hand.

"You could see the frustration - on both sides - at the final whistle.

"Arsene Wenger will be slightly happier than Manuel Pellegrini after his team came back from behind and showed real spirit in the second half. And Arsenal may feel they had the possession and chances to win it. It was City's first half, but Arsenal's second.

"Liverpool might be the big winners today - without kicking a ball."

They looked on course to achieve that when David Silva gave them an early lead, but Arsenal showed great resilience and commitment to claim a draw through Mathieu Flamini's 53rd-minute equaliser.

Neither side could fashion a second goal, leaving Liverpool as the big winners of a dramatic day. They will go top if they gain at least a point against Tottenham at Anfield on Sunday.

City were unable to repeat the impressive performance that brought them a 3-0 win at Manchester United on Tuesday - but great credit should go to Arsene Wenger's side for the manner in which they overcame an early setback to keep their own top-four hopes on track and stay in touch with the leaders.

As they did at Old Trafford, City exerted their authority from the kick-off though this time they had to wait 18 minutes before they made their superiority count with a goal.

City were causing major problems down Arsenal's left flank, where Lukas Podolski was affording Kieran Gibbs little or no protection. The German was the culprit, conceding possession to Yaya Toure and when Edin Dzeko's shot hit the post, Silva was on hand to bundle home the loose ball.

Arsenal, who collapsed in such abject fashion in the 6-0 defeat at Chelsea, showed plenty of resolve this time although they were unable to test Joe Hart, with Olivier Giroud demonstrating a hint of desperation with a speculative effort from the halfway line.

City had not driven home their advantage and were punished eight minutes after half-time - seconds after they were inches away from doubling their lead.

Jesus Navas's cross was touched out by Arsenal keeper Wojciech Szczesny, only to rebound off Per Mertesacker and roll inches wide.

Arsenal capitalised on their reprieve and were level moments later when Flamini timed his arrival in the penalty box perfectly to sweep Podolski's delivery out of the reach of Hart.

Podolski then had an opportunity to turn the game on its head completely but his shot was blocked by Hart's legs when it seemed certain he would put the hosts ahead.

Both teams needed the win and it took some frantic Arsenal defending to block Dzeko and Toure when they found space in the area.