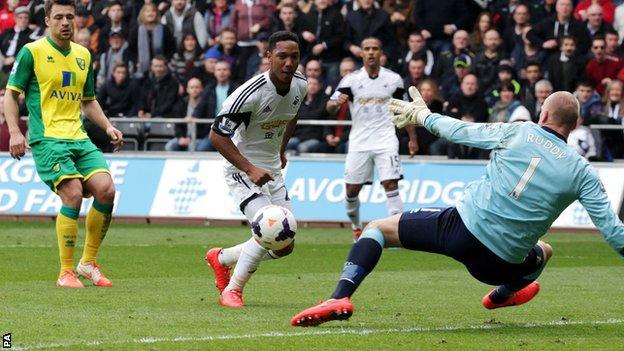 A Jonathan de Guzman double helped ease Swansea City's relegation worries with a win that leaves Norwich City looking over their shoulders at the drop zone.

The Netherlands international blasted the Swans in front from the edge of the area before slotting home a second.

Swansea goalkeeper Michel Vorm produced a couple of fine saves as Norwich looked for a way back into the game.

But Wayne Routledge's low finish sealed victory to move the Swans above the Canaries in the Premier League table.

They are now 13th, seven points above the relegation zone, while Norwich are 15th.

With the two sides fighting for Premier League survival, it was understandably a tense atmosphere at the Liberty Stadium before kick-off, with both sets of fans aware that three points would mark a major step towards safety.

The home supporters were fully behind their side from the start as every Swansea attack and tackle was greeted with cheers, but signs of nerves were also evident as their voices fell silent every time Norwich crossed the halfway line.

Fortunately for the hosts, such attacks were infrequent as Swansea dominated the first half.

Michu, making only his second start since returning from injury, threatened during the early stages but could only fire two efforts wide of the Norwich goal.

The Spaniard lacked the kind of conviction that made him one of the Premier League's most lethal finishers last season and instead it was De Guzman who opened the scoring.

Jonjo Shelvey crossed into the box and the Canaries defence could only clear as far as De Guzman on the edge of the area and the midfielder lashed the ball home.

De Guzman and Routledge were pressing high up the pitch in support of Wilfried Bony and Michu, making it hard for Chris Hughton's side to get out of their half.

Consequently, Swansea were well in control as they continued to push forward in search of a second, which duly arrived just before the break.

De Guzman passed to Bony, who in turn back-heeled into the Dutchman's path and he clipped the ball over Norwich goalkeeper John Ruddy and into the net.

Norwich nearly got back into the game straight after the break as Robert Snodgrass's powerful low shot was cleared off the line by Ashley Williams.

Ricky van Wolfswinkel, still looking for his first goal in 23 games in all competitions, then saw a header turned behind by Michel Vorm.

But Norwich's attacking threat faded as the game wore on and Routledge's low finish after latching onto Shelvey's through ball sealed the points.

Norwich boss Chris Hughton: "We find it very difficult away from home just to get that right formula.

"In a game when you're up against a team that's as good a passing team as Swansea are, you can't give them the amount of ball we gave them.

"I thought we conceded three soft goals. They showed great quality with what they have and real pace to get those goals, but it's that balancing act at the moment."