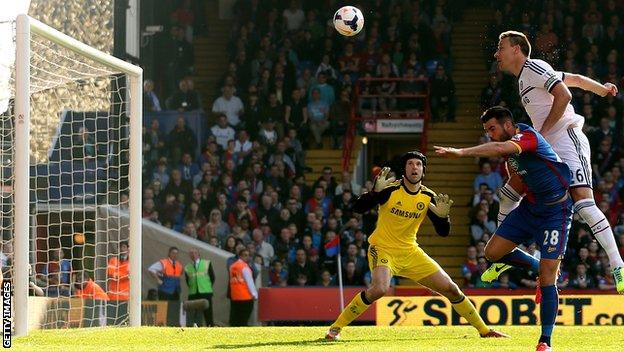 In a pulsating game, Palace played at a quicker tempo, displayed the greater quality and could easily have won by a bigger margin - John Terry's own goal from Joel Ward's teasing cross settling matters.

Even a point would have been a significant blow to a Blues side who remain top, one point clear of Liverpool and two clear of Manchester City, although Manuel Pellegrini's team have played two matches fewer than Chelsea.

The Eagles, playing in front of a sold-out and deafeningly loud Selhurst Park crowd, are now five points clear of the relegation zone after Cardiff's 3-3 draw with West Brom.

Chelsea can have no complaints after a performance lacking urgency and organisation, and characterised by misplaced passes from the off. It was in stark contrast to the display that blew away Arsenal in last week's London derby.

Fernando Torres did have an early close-range strike blocked and had a half-hearted appeal for a penalty turned down.

And Chelsea almost took the lead when a superb break on the left flank saw Cesar Azpilicueta's cross turned behind by a combination of Andre Schurrle and Ward.

"This is Tony Pulis's best moment as Crystal Palace manager but one of the worst moments of John Terry's Chelsea career. It was a wretched day for him and Chelsea.

"Crystal Palace wanted it more, they were hungry and they deserved the win. Chelsea were second best and need to pick themselves up."

But Palace were the better side after a relatively quiet opening 20 minutes, defending deep and denying the visitors the space they so expertly exploited against the Gunners.

They were also increasingly threatening in attack, as Yannick Bolasie shot wide, Blues goalkeeper Petr Cech made a couple of good saves and Adrian Mariappa twice nearly set up goals with incisive runs down the left.

The first of these saw the full-back find Bolasie, who failed to set himself in time for the driven cross and made a mess of the follow-up shot.

Eagles boss Tony Pulis was then left flailing his arms in disbelief as his side failed to win a penalty when referee Lee Mason ignored Gary Cahill's clumsy charge into Cameron Jerome.

Pulis's counterpart Jose Mourinho was similarly animated, although his anger and copious note-taking was prompted by a poor, disjointed first-half performance.

The ineffective David Luiz was taken off at the break and replaced by fellow Brazilian Oscar but it did not spark a Chelsea improvement.

Within seven minutes of the restart, the Eagles deservedly led when, under pressure from Joe Ledley, Terry headed Ward's left-wing cross into his own net.

Eden Hazard almost levelled within a couple of minutes with a curled effort that was superbly tipped wide by home goalkeeper Julian Speroni.

It was the signal for a final half-hour full of chances at either end.

Terry nearly made amends for his mistake with a header from a corner that went just over, while Frank Lampard was denied by Speroni, who brilliantly anticipated the England midfielder's strike.

The second goal ultimately proved unnecessary, although a terrible back-pass by O'Keefe almost gifted a Torres an equaliser before Palace saw out four minutes of injury time to secure the win.

"It's a very important result for us. Our results had dropped off, but the performances had been OK, but to beat Chelsea will give everyone a boost to push on for the last seven games.

Crystal Palace had never previously beaten Chelsea in a Premier League match. They had drawn twice and lost seven times before this victory

"The Premier League is the most competitive league in the world and that's why it's a great league. The top teams always have to play well or they can come unstuck.

"Chelsea are a fantastic club and it's a great result for us. We picked the team on Monday and just worked through it for four days. We had a few chances in the second half and I'm pleased we got through the game."